Review of The Band at Royal & Derngate (Derngate), Northampton 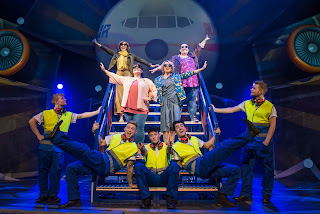 It is fairly safe to say that I am not, on paper, in the optimum target audience of this new musical, The Band by Tim Firth. It revolves very much around a group of girls, then ladies, who grow up through their love of a boy band, "the boys". However, for those who have seen the work of Tim Firth before, you will know that he has a knack for making all things accessible but also extremely touching and funny as well. This is why The Band actually becomes a show for everyone.

For those unaware, this unnamed group in the show, just happen to perform songs by Take That, and there are also five of them, however, for those expecting a history of that group, you will be disappointed to find, that is your lot pretty much in the Take That area, they don't get a name check at any point in the show. This show actually follows a fictional fan base, from their poster strewn walls of their teenage bedrooms, and to their lives, and the tribulations that go with it, of 25 years later.

There is a nice love of its era early in this piece, which begins with a massive screen pre-show, depicting news via Ceefax (which also offered the magic moment of my annoyingly young companion of the evening, their first knowledge of a certain Lorena Bobbitt. Go Google kids!). The nostalgia isn't overly done, but with flashes of the 90's opening of Top of the Pops, and the girls all state of the art, holding their cassette recorder to the side of the television to record their favourite songs, fills the audience, that can remember such things, with a warm glow. 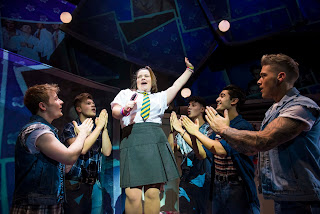 It opens really well also, with a massive reveal as the curtain is literally pulled back to unveil Rachel's bedroom (played young by Faye Christall and Rachel Lumberg as the older version, who was also superb in Firth's This Is My Family). Then during the opening number, the boy band pop spectacularly out of the bedroom furniture, in a really nice sequence. It grabs the audience's attention superbly and sets the scene for a really entertaining evening.

There are some great performances from the young and old versions of the girls, and they have some meaty life events to deal with, as well as a truly brilliant reveal sequence where young become old to spectacular effect, one, in particular, is a brilliantly written moment. Both Christall and Lumberg make a likeable pair as the Rachel's, Lumberg especially plays the older, haunted version very well, not willing to be married for one very special emotional reason.

Both Heather's are tremendous, Emily Joyce the smartly dressed confident older version, while Katy
Clayton is even better as the younger, man-hungry version, bolshy, yet immensely likeable. It is fair to say though that all of the cast of girls/ladies work brilliantly together, creating a loving and emotional rollercoaster of a piece to the stage.

The boy band played by AJ Bentley, Nick Carsberg, Curtis T Johns, Sario Solomon and understudy on the night Harry Brown, take quite a backseat to proceedings in the show. Created from the winners of the BBC show Let It Shine, they form a group that isn't really Take That, never really representing any of the members, although you could perhaps mark a few of their cards if you were a big fan. What they do though is create some very effective versions of the songs, harmonious working together, and extremely nimble to create the choreography of Kim Gavin, which is effective in recreating the original 90s style dance numbers. 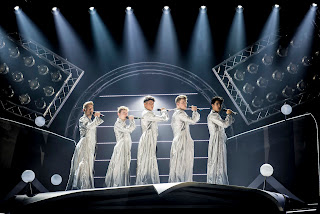 Finally, from the cast, there is a star turn from Andy Williams as Every Dave that is perhaps one of the most brilliant comic performances I have seen for a while. Floating in as a roadie, airport security, janitor, police officer, he steals every scene he is on stage for. It's fitting that he gets to play it sharp-suited and in charge guy at the curtain call, he deserved it. I commend Firth the writer for creating the character, but perhaps so much more, Willaims for making him so memorable. Genius!

The routines are nicely recreated with the concert sections really feeling like concerts with the huge sweeping use of lights, and a tremendous idea for the performance of The Flood with a massive fan, smoke and the remnants of confetti in operation, us in the front rows felt the full impact of this scene. The first concert piece has some really nippy, almost onstage costume changes, keeping great pace to the scene, and in fact, the whole show looks magnificent costume wise. Both numbers on the buses are really well created, with the latter Back for Good a really poignant piece, where the young and old meet. There is a moment at a fountain which is a little strange but teeters without totally falling into the odd, and it does pay off with a curious sidestep almost back to Mrs Bobbitt.

The Band is excellently staged, a vast set from Jon Bausor, brilliantly conceived in the idea of pinned up photos, the giant round pins becoming lights of their own. The photos become the backdrop of projections to create the locations, and while projections are often a lazy staging option, they don't feel it here, as with the set being impressive, to begin with, you don't feel you are missing out. There are also no issues with the projections like there were for example with The Last Ship, the images from the projection are crystal sharp and don't interfere with the performers, it works perfectly. 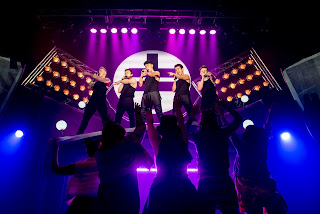 Technically it wasn't perfect, the sound balance wasn't quite up to scratch, so often a problem with shows still, and early on in the first half, dialogue and some lyrics were washed away, particularly for the girls. There was a definite improvement in the second half for me, so, once again perhaps the right knobs were twisted in the interval.

Writer Tim Firth has created the almost perfect anti-jukebox musical, almost as if he has been wounded in the past by them, as many of us probably have. He knows just how far away he can get away with it, pushing us to the very edge of fear that we are about to cringe, and pulling us back from the edge. As one magic moment portrays in the show, even the most successful group doesn't always have a song for every time in life.

The Band is a brilliant evening of entertainment, far better than you might expect a jukebox evening to be derived from 90s pop. This is an emotional tale of friendship and loss, and just general life, which just so happens to have Take That songs in it. Tim Firth has quite a knack for writing brilliant shows, and will The Band he has struck gold once again.