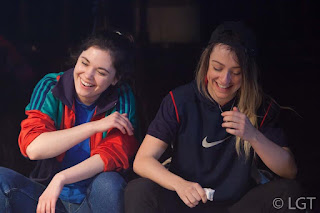 I was just short of the right age to witness raving first hand in 1990, and my sheltered life would probably have resulted in my missing it anyway. However, perhaps based on Static from the quintuple of lady performers in EVE Ensemble, it was perhaps a lucky escape.

While they are clearly having immense fun in their raving, brilliantly recreated in two scenes in this production, things turn quickly into a mess, as Dani (Kate Morgan-Jones) decides that a bit of dealing will help the bank balance. So recruiting her mates, including the new girl, the posh and very innocent Emma (Ellen Tritton), they set about distributing the merchandise. This sequence includes trying to sell the gear to us the audience in a nicely worked scene, and also with the performers dealing with different replies, one of which included Tritton smoothly dealing with, brilliantly in character, with a specific request from one audience member. Neat work! 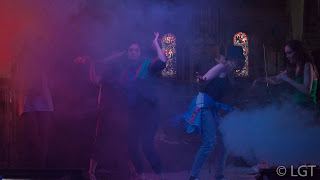 Static is a bit like an all-girl Trainspotting, fun and entertaining, but clearly mostly heading for disaster, so you have to be prepared for the consequences of witnessing Cat (Tiffany Mae Rivers) injecting, over-dosing, and nearly dying in the aisle of the church. The power of scenes is where Static is at it's best with those like this, and brilliant confrontation ones between characters and of course the rave ones.

There are some amazing performances going on as well. The always strong Kate Morgan-Jones is again incredible as the domineering Dani, leading iron-fisted over her friends and controlling what they do and when they do it. It switches though nicely in performance though when she discovers Cat, and the consequences of what she does tells on her friends as the story develops.

Ellen Tritton is wonderful as Emma, all brilliantly awkward, and oh so believable, keeping it just the right side of being just that little bit too silly. Her dancing during the rave scenes was a thing of comic genius as well. It's also a nicely developing character of building toughness as well, which Tritton creates superbly. Megan Leask-Walters meanwhile is tough as nails as Lou from the start, but also cold as ice and very much not a team player. Events spiral terribly for her character, as for all in this tough play, and Leask-Walters depicts the emotion of this with an impressive intensity. 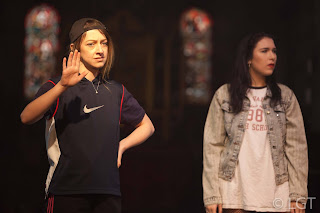 Georgi McKie's Smush is perhaps the intelligent, sensible one of the original four and you can't help but root for her, and hope that she runs. Finally, though, I really enjoyed Tiffany Mae Rivers' performance of Cat, she is probably the strongest written of the five characters, and the story arc the most troubled, amongst a troubled lot, and she performs the role brilliantly.

Staging is clever, and as long as you could see developments in the aisle, perfectly fine, although I am sure that there would have been a few audience members missing some of the action. One criticism though would be the overuse of the smoke machine, absolutely fine during the rave scenes, but often far too much of a distraction during scenes it simply wasn't needed for.

For me, Static is more about the performances, than the actual depth of the story. The story is mostly very simple but allows the characters to be the important factor, which shows the quality of the actors within it. Tough, challenging theatre, and thoroughly entertaining. 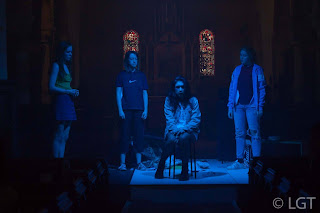