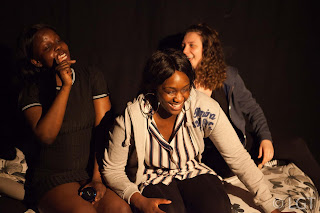 Following the sexual abuse led Screw You, my second Flash of the week was Athena Theatre's domestic abuse-themed Lay Me Bare. They were clearly not going to break us in gently this year at Flash. However, if there is one thing that Flash does brilliantly, it's tough subjects. The students in the group are clearly passionate about the themes they choose, and nearly always, this translates into a quality, if often tough, watch.

Lay Me Bare depicts the very different characters of Monica Brown (Xara Chisano), Fola Balogun (Maddy Ogedengbe) and Elsie Smith (Farrah Dark), all who though share one despair in their lives, they are victims of domestic violence from their partners. We first meet them all, nursing black eyes, and in a stark opening sequence, they all attempt to hide the visual appearance of this with make-up.

It's a powerful opening, and what follows is a tough exploration of these three peoples lives, one a partner to a guy who uses the prison door like a revolving one, another who wishes to conceive, and a hairdresser whose partner is a hopeless drunk.

Each of the characters is rounded individuals, unlike their partners, who are faceless entities in this piece, perpetrators, but rarely fleshed out. I personally am unsure whether it is a weakness of the piece to not allow us to learn more about these, other than the constant fact that they are the bad guys. It leaves the piece one-sided at times because of this.

What it does allow to happen though, are three brilliant performances from the actors. All become real and desperately sad in their plight. Chisano creates a quiet brooding character, all emotion held within as Monica, the terror portrayed within facial expressions over verbal dialogue.

For me, I found Dark's portrayal of Elsie the lighter of the three, the plight is the same, however, perhaps because of the time setting for this character, the sixties, it for me had an easier approach to the telling, away from the normal shackles of more recent life. Even when bad things were happening, you can't help but think that they weren't as bad in the old days. A ridiculous statement, sure, but one that anyone over a certain age is often very responsible for. Bad things have always been bad things, no matter when they happened.

Finally, we had the anguish of Ogedengbe's Fola Balogun, fuelled with some tremendous realism. The sequence with the doctor becomes a one-sided scene of despair, all from Fola, and apathy from the other in conversation. She is offered nothing from the doctor for help.

Because of the nature of this play, there is little light relief, there is hope in one of the character's future at the end but little else, but other than Dark's lively Stacey, this is, as the material suggests, pretty bleak.

One definite criticism from me though was the use of purely recorded material during two telephone conversations, where neither actor did anything more than a passive expression throughout. It would have been great to have seen at least part of this performed live, or at the very least, some visual impact from the performers. For me, a very curious decision.

I was also curious as to whether these characters were actually based on real peoples stories, due to especially the decision to set one of them in the sixties, with clear birth and death years. Investigating online though, left me just finding a woman's refuge in Australia named Elsie. So perhaps, these were just created lives.

Lay Me Bare was, however, a well-conceived piece of theatre, powerful, telling and very well performed, but obviously not intended to be something to be enjoyed.