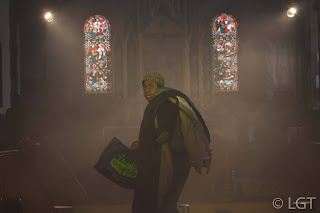 Set in a church and performed in a church, (His) Sheep from Control Theatre presents the first site-specific performance of Flash this year. The smart and stylish Pastor Stanley (Mo Samuels), sits clutching the good book, and nodding in recognition as we take our seats. Random jazz slowly fades and Pastor Stanley flys into a Billy Graham-like presentation to us, "his sheep", with his line "God is good" destined to be a force throughout the show.

(His) Sheep is an unusual piece of theatre, the story often challenging to follow, and if indeed you follow it, it has a habit of wrong-footing you with another curious swerve. At the opening, while the Pastor is preaching, a homeless guy, Kevin (Terell Oswald) lurks in a corner, laying amongst an assortment of his precious belongings, his life in a bag. He begs us for a few pieces of coinage to survive on. He also seeks the help of Stanley, who is known for being one to really help the homeless, or does he? 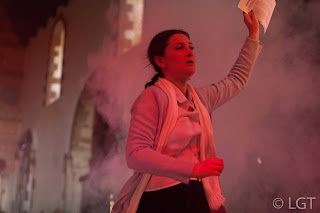 Later, Kevin's sister enters the situation, Victoria (Chloe Hoffmeister) is a journalist, and apparently returns, not looking for Kevin, but in pursuit of Stanley, who she is investigating. When the three worlds collide, an odd, often unsettling story, opens up. This isn't the first time also, that you get the feeling that the material you are watching, isn't truly suitable to be played out in a church.

There was a lot of physical theatre in (His) Sheep as well, which was very well performed. For myself, I did feel a couple of scenes were a tad repetitive, but the intensity of them really helped to create a foreboding atmosphere to the whole piece. 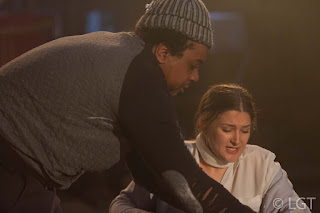 All performances are strong. Samuels cuts a fine figure and deftly manages to sweep between the Godly pastor, and his alter ego, exhibiting a real scary, intimidating performance. I was really surprised how much I enjoyed Oswald's homeless Kevin, he is a performer that hasn't really for me come to the fore previously, but not for the first time, the Flash performance delivers.

Finally, Hoffmeister presents a cold and calculating Victoria, full of inner aggression and mostly not a very nice person, trying to get what she wants. It needs to be strong, and the performance is, but I almost enjoyed the trouble she got in at the end. I apologise for that, I know it's wrong!

The idea behind (His) Sheep is great, it is definitely for me a little long, and a nice bit of pruning would have made it much more fulfilling. However, generally, quality stuff, and a brilliant ending. 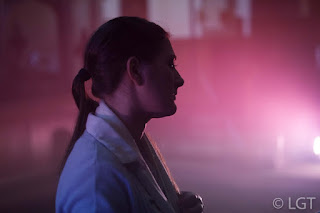