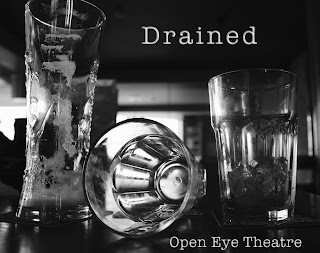 Back in 2015 when I was attending my second year at the Flash Festival, I had the pleasure of seeing a show called I Forget What I’ve Forgotten, a solo show performed by the superb Catherine Garlick, it was very much based on personal experiences, and it was one of very few Flash shows that I have made time to see a second time. That second time, it became the only Flash that I stood at the end of (to date), and it was the first that emotionally hit me hard.

While I didn't stand at the end of Open Eye Theatre's Drained (I was incredibly close), it left me a spent force of emotion. My fellow blogger and companion of the week The Real Chrisparkle, witnessed my tears, and I was actually perhaps as emotional as I have ever been at the end of any theatre show. 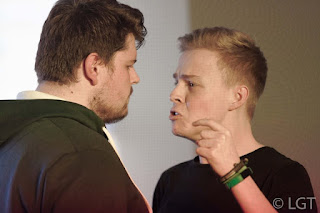 Drained was a slow burner of emotion, which I guess just gently took hold like no other before. Our three characters, Laura (Bryony Ditchburn) and her two brothers, Will (Robert Charles) and Jamie (Jake Wyatt) gather at the wake of their father. Laura is the sensible one, the one who tries to keep it all together. Will tries to help, but is more concerned about his boyfriend, than his sister. Then there is Jamie, never about, didn't go to the funeral and just turns up for drinks at the wake.

It's a powerful trio of characters, and Drained doesn't rush to let you in on the story that is going to develop. An ingenious scene structure takes us through the period of a year (simply created with changing posters), all in the same bar, from the wake, through Christmas, Valentine's Day, Easter etc, until we end up a year later, broken and devastated by what has played out through the scenes. 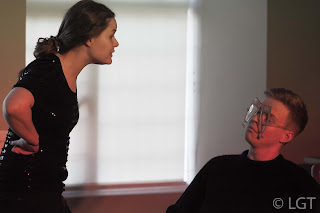 We learn two things during this year, which are most vital to the storytelling, first is that Jamie harbours a hidden hatred of the fact that his brother is gay. This comes out via the most vitriolic outburst you could wish to witness, stunningly played by Wyatt, and coupled with one amazing performance from Charles as well on the receiving end. It's an uncomfortable scene to watch, of course, it should be, but the admiration of the two actors to make it work is sky high from me.

The second, and even more devastating story though, it that of Laura. Quietly observing how her brothers are being ripped apart, and herself being desperate for a relationship, and being so alone, the seeds of development of her mental breakdown are sown. As Laura, Ditchburn gives one of the very best performances at Flash that I have seen (and at the point, I saw Drained, it was my 63rd show). The scene where she desperately tries to get an answer on the telephone is just so incredibly well played. The proximity, the closeness of the performance truly helping as well. A privilege to witness a performance so good, so close and this was pretty much I think the point when my own strength failed and the emotion began to flow. 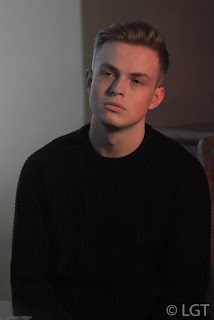 It's difficult for me to say much more about Drained, there is some light relief in a wonderful scene where Charles plays Steve, Jamie's workmate, it's a brilliant comic scene, with some really big laughs, and helps create the light and dark, that many plays miss.

As already mentioned, this was my 63rd Flash when I watched, it was an emotional rollercoaster, and I have no hesitation in putting it in the top three of the shows I have seen in my five years. Just staggeringly brilliant in every way.