Flash Festival 2018: Deciding What To Do With Dad by Blue Shift Theatre at Castle Hill, Northampton 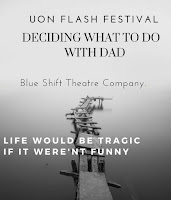 Let's all laugh hysterically at dementia! That is the winning principle behind Blue Shift Theatre's Deciding What To Do With Dad, with black comedy of the highest order, they create one of the best Flash shows I have seen. However, before you think we are talking cruel humour, this is far from it, it is understanding very clearly of the situation, and is far from nasty in its writing.

It can be expressive certainly, we get plenty of poo references, and it isn't a play you would take granny to. In fact, it starts rather wonderfully, breaking the fourth wall and a reading of a disclaimer, that is in itself, more offensive than many plays. The playing to the audience is truly brilliant in this and creates much humour as a result, and the cast is clearly both in their element and comfortable in this.

Jac Burbidge, Jake Statham and Hal Gallagher play three brothers, one sensible and rational, one who has been a wandering, and one a clown, literally. They are an immense trio, a likeable and dysfunctional group, expertly created by the three actors. Here, we have three performers on a very real level footing. A favourite has to be perhaps Gallagher though, simply because as the gloriously miserable clown, he gets the best material. The phone call that escalates from the parents to the child is one of the most gloriously funny scenes.

Burbidge gets his moment to shine, which he clearly tells us, with a nicely performed song which lurches through the emotions. Meanwhile, Statham provides some brilliant comic timing to his scenes, most especially at the moment where he thinks his brothers are going to kill him.

While this play has a clear story to tell, which culminates emotionally with the reading of their father's wishes, it also continues to feel fluid, with it happily zipping in and out of the fourth wall. It's dangerous to try to deal with us, the unreliable audience, but the performers are so assured, they not only keep the interplay successful but don't allow their story to unravel. It's a brilliant approach and works on every level.

Deciding What To Do With Dad is an exceptional piece of Flash, and indeed theatre in general. It has clearly been created with a great deal of love, and the commitment of the cast is total, clear from the polished nature of the whole show. An exceptional Flash show.