Flash Festival 2018: Beneath It All by Balance Theatre at St Peter's Church, Northampton 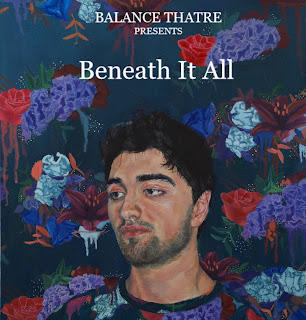 There is a brilliant scene relatively early in Beneath It All which perfectly portrays the awkwardness and discomfort of the character of Charlie played by Oliver Franks, with so-called normal life. In a crowded corridor, he shifts uncomfortably out of the way of invisible people, even crashing into one at one point. It's an extremely clever way to quickly build the character and extremely nicely performed.

Beneath It All from Balance Theatre tells us of the early life of three young people and their burgeoning relationships, and hormones, and winding back to the start, we find that Charlie has not had an easy life. The play opens with him in a wheelchair, we learn very little about why he is in this, but that doesn't matter, the thread of troubled times is enough for us to understand the story Beneath It All is telling us.

There are a number of immensely tender scenes in Beneath It All, and they all build up our understanding of these troubled, but very endearing characters. There is no hostility here from any of the characters, and the most aggressive scene between the three only really comes from a flippant comment by Cecily over Charlie's sexy dream, and "it's not as if you raped me is it?" comment. It's a powerful moment, expertly reacted to by Franks. However, that is almost it in conflict. It's unusual to find a play where you like all the characters in it, yet still has enough impact to keep the piece intriguing, and for that Balance Theatre have to be applauded. 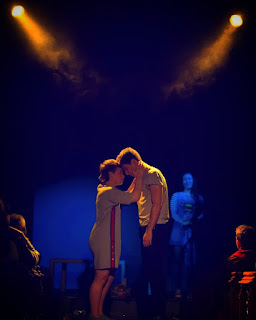 Very occasionally though, the low impact emotional scenes fall victim of the vast church theatre space, and dialogue can be lost in the lower volume scenes. However, these are few and far between, and I appreciated the tenderness of the scenes more than anything that I might not have heard.

As already alluded to, Franks is excellent as Charlie, conveying his almost terror like reactions to life in general, and the concern in his head that he had been really bad just having a sexy dream. It's a commanding performance that glues the whole show together.

As Cecily, Elizabeth Ferreira is once again immense on stage, a captivating presence even. As part of a physical representation of Charlie's dream, they create a wonderfully lyrical movement piece, full of amazing tenderness, and she also shows some amazing strength within this performance. Her character is also growing in this world of love, but with a much more relaxed style. Ferreira has been a strong performer from the first time I saw her in her brief moment in the first year performance two years ago, and it's great to see the momentum has not ceased. Wonderful work.

Completing the trio is Alexandra Pienaru as Charlie's sister Natalie. She is the grown-up of the trio, but also with some serious issues of her own, and Pienaru gives her great depth through her scenes. It has to be said, it is a curious relationship that she has with her brother, and I did wonder whether we were meant to detect something a little "different" going on. Perhaps that is the idea hidden, or just something that I felt was happening but wasn't there. Either way, Pienaru completes an incredibly strong trio.

I really enjoyed Beneath It All, it's a tremendously emotional play which creates some brilliant ideas to tell its story. Highly effective physical theatre, well written and full of lovely tender performances.