March 18, 2016
So once again another year comes round, now my third, as the final group performances take place of the third year actors. Following these actors is always a pleasure like following our children (without any of the monetary implications) prepare to enter the big bad world. This group is particular poignant to me more than the previous two, as 719 days ago I had the pleasure of seeing their first public performance at the Holy Sepulchre Church and followed them through all their performances to these final shows before the Flash dissertations in May.

The first of the three shows for me was Blue Stockings by Jessica Swale. This tells the powerful story of four young woman's educational battle to gain the right to graduate with their degree at Girton College, Cambridge. Set in 1896 also allows the turmoil of the ongoing women's suffrage movement to make its mark. All is set for a heady mix of thought provoking drama.

Playing the four ladies and all on tremendous form are Lucy Kitson, Sophie-Rose Darby, Ellen Shersby-Wignall and Danni-Louise Ryan (we really need to get Lucy a hyphen). Kitson as Tess is effectivelvly the lead character and once again she doesn't disappoint. When following groups like these building actors over such a time of two years, it is simply impossible not to gain favourites and for me Kitson is one of those. Throughout she has displayed a wonderful style of emotion in her characters while maintaining that sparky twitchy edge that makes her so very watchable. Personally for me she has been one of the best females over the three year groups I have seen, up there with Brigette Wellbelove. As Tess, she is soft and gentle, while having that determination etched on her face.

During the first half another standout performance is from Darby as Maeve and she features in one of the key and most emotional scenes of the entire play towards the end of the first act. This is an incredibly tough scene to watch as the family and educational responsibilities tear her apart with tremendous impact. Darby is during this quite wonderful and the result is a double blow on the audience.

This play has quite a few repellent gentleman characters in it and possibly for the first time during a play, my usual mild mannered self was not only seething in his chair, but almost felt like mounting the stage to (attempt) to floor them. The first of the two in particular and an albeit brief role, is Stuart Warren as visiting lecturer Maudsley. He is incredibly powerful and elicits every gel of emotion from the audience (certainly as I say this one).

However if that wasn't enough anger generated from the play, we have Tom Stone's Lloyd to deal with. Possibly the most hideous character I have yet seen on a stage and therefore the most eminently punch-able person ever. It is quite a credit to Stone's performance that this truly is a body shaking moment of theatre. Quite brilliant.

Once again there were very reliable performances from Jaryd Headley as Edwards and Stephanie Waugh's as Mrs Welsh was tremendously powerful in those high impact scenes, particular that which she had with Rhiana Young's Miss Blake. I was very impressed with Kieran Hansell's portrayal of Mr Banks, one of the few male characters that was one hundred percent likable. One other pleasant surprise came with Jared Gregory finally getting a much improved meaty role in that of Will. It was an endearing performance and it was wonderful to finally see a bit of what he could do.

Once again for a Uni show the set and direction from Jamie Rocha Allan is kept simple yet effective, allowing the actors to very much do their thing on a mostly stark background. It still however cleverly teaching them a great deal in manoeuvring the furniture cleanly (something I have started to watch a great deal). They made it work well considering there were quite often a few chairs and tables about. I also loved the blackboards depicting the locations, and the banners at the end were great

So a very highly charged play excellently performed and with a couple of real standout performances. If the other two are as thoroughly entertaining (which I feel certain they will be), I am in for another four hours or so of magnificent entertainment. 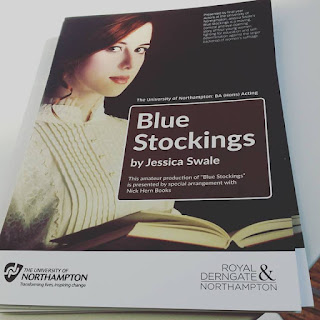