March 10, 2016
Up until seeing Les Misérables this week, I regarded it as the best musical that I had never seen live. It has without doubt in At The End Of The Day and Master Of The House two of my favourite musical songs, this coupled with several others, an interesting story and some real rich characters make it just the almost perfect show. I would personally say that the best of the music is done and dusted before the interval, however as a whole package it is one of the best. Therefore when I heard just a month or so that just up the road I could experience my first live production, I obviously jumped at the chance.

Presented by Northampton School for Boys with a twenty-one strong orchestra and a massive cast of sixty to provide all the relevant roles of beggars convicts and prostitutes, this is clearly a very big enterprise. From the outset it is also obvious that a lot of work has got into the production with a lifting powerful opening, including the chain gangs appearance via the side theatre door and aisles. Indeed the whole show makes magnificent use of the off-stage space, director and choreographer Lindsay Greenaway sure leaves a mark of quality. This is described as a school edition, however at first glance with no investigation I didn't notice nothing obvious missing. I had assumed some of the more adult language and suggestion would be cut, however everything I remember was included including Fantine's decline and Thénardier's inadequacies.

Leading the cast and with a commanding presence is Ben Jackson as Valjean. He portrays the role through the tumultuous life events he suffers with lovely emotion and has, like most of the main cast a strong singing voice. George Alger plays Valjean's pursuer Javert with wicked intensiveness, a character who although he is on the side of the law, is easily despised through his pursuit over a loaf of bread. One of the true stand-out moments of the show though comes from Holly Donaghue's portrayal of Fantine and her performance of  I Dreamed A Dream. Standing front of stage, she performs the song simply incredibly, imparting every possible amount of emotion into the lines. It truly was quite amazing to witness.

At perfect odds to the sad emotion, were Sam Gellard and Miranda Spencer-Pearson as Thénardier and Madame Thénardier. Bold, brassy, sleazy and tremendously over the top, they were perhaps perfect as a pair and clearly seized their opportunity to play perhaps two of the most perfect characters of musical history.

Technically there were a few issues on this the opening night. It was clear that Ben Jackson had to deal with an annoying earpiece and I hope this is sorted for the other two performances to allow him to concentrate on his performance. He did however deal with the whole issue proffessional and as unobtrusively as possible. Lighting was also a little haphazard with the performers not always lit up at the correct time, and some misbehaving bits of set in the second act slightly distracted.

However these truly are minor concerns as a complete package the show was a huge success with big bold scenes with huge numbers of cast members present. Favourites being the Lovely Ladies and of course Master Of The House, well staged and well performed.

I truly loved it and it was lovely to finally see this show live. When I eventually get to see a professional production of the show, it will be of course in all likely hood be better performed technically and more cleanly produced. However I suspect that it will not have the heart, dedication, and joy from the performers that this production has. It truly was three hours of wonder.

Les Misérables runs until Friday 11th March, 2016 at the Cripps Hall Theatre and details can be found at http://www.nsb.northants.sch.uk/the-school/latest-news/les-miserables-school-edition-2016/ 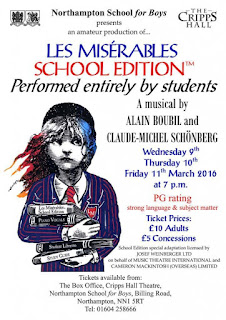