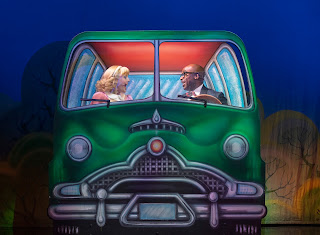 Richard O’Brien’s anarchic, crazy, surreal, weird, bizarre and often incomprehensible musical The Rocky Horror Show is knocking on the door of turning fifty years old, and its success seems to continue as if it was fresh out of the crazy box yesterday. So, a review might seem pointless as the dressed-up audiences constantly fill every theatre it comes to, however, dammit, let us write one anyway.

The Rocky Horror Show tells of the adventures of Brad and Janet, two young, newly engaged love birds. On a dark and grim November evening, they run into car problems and find themselves at a Frankenstein-esque castle and meet handyman Riff-Raff, crazy scientist Dr. Frank N Furter and an assortment of crazy characters. What follows is a science fiction B-movie story which sometimes you can follow, and sometimes you can’t and oddly, it doesn’t really matter. 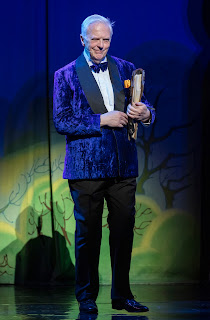 I first saw The Rocky Horror Show in 2019, and it must be said it was a baptism of fire witnessing its crude, crazy humour and bizarre story coupled with the somewhat surprising amount of audience participation. However, three years later I came prepared with that knowledge (and over half a bottle of wine inside me) and guess what? I really, really enjoyed it. Disclaimer: alcohol isn’t a requirement to enjoy it.

It helped that this version was a much sharper presentation thanks to an exceptionally better cast. When I saw the show previously, the superb Kristian Lavercombe played Riff Raff and then was the star of the show, and he features here again as does the equally excellent Stephen Webb as Frank N Furter. However, while they present their signature excellent performances in characters they have played for a considerable time, they do, on this occasion get upstaged elsewhere.

For me, the star of the show this time is the role which was one of the weakest elements my last time up, the narrator. Philip Franks here is simply incredible and worth the ticket price on his own. His sharpness of delivery and his assuredness with the audience is everything the role needs. It helps that he has impeccable timing in his delivery and that his jokes are sharp as a knife. The Prince Andrew one especially is one to be relished. 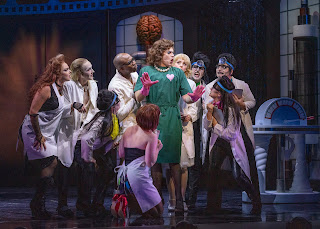 Elsewhere, maybe the biggest surprise is Ore Oduba as Brad, a comical masterpiece of delivery with awkwardness to perfection. A success of "name" casting, unlike many a time in the past. He also is an excellent singer and delivers his numbers alongside Haley Flaherty’s captivating Janet to perfection. Their partnership is a highlight throughout the show.

There are few weak links in this production and the ensemble and cast bristles with energy upon Hugh Durrant’s perfectly comic book-like and bright set. They expertly delivered the musical numbers alongside Greg Arrowsmith’s directorship of his excellent band. Director Christopher Luscombe keeps this two-hour show (including the interval) moving sharply with no dip in pace at all and creates slick and smooth scene changes with the minimum of set change requirements. 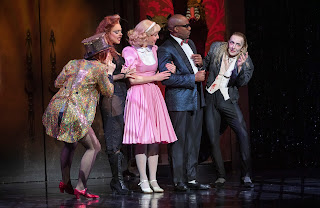 The Rocky Horror Show is at its best in the first act when it has a more precise story being told and without doubt the best of the songs such as the excellent Damn It, Janet, Over at the Frankenstein Place and of course Time Warp which sees many of the audience out of their seats really early in the show.

This incarnation of The Rocky Horror Show comes overwhelmingly recommended, be you a regular, which means you are coming anyway, or new to the show. It is a show that all theatre audiences should witness at least once, to see if they are a fan of this incredibly bizarre and iconic show, and this version with this excellent cast is probably the very best place to begin.

The most surreal and fun night to be had without the use of hallucinogenic drugs.
⭐⭐⭐⭐⭐ 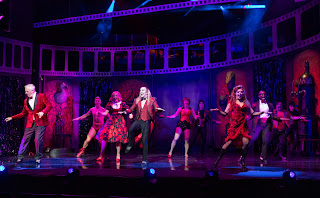 Preview of The Cher Show at Milton Keynes Theatre

August 05, 2022
Next week at Milton Keynes Theatre the brand-new production of The Cher Show starring Debbie Kurup, Danielle Steers and Millie O’Connell hits the stage. Running at the theatre between Tuesday 9 and Saturday 13 August, the production features the three actresses portraying Cher in three different ways throughout her iconic career, with Debbie as ‘Star’, Danielle as ‘Lady’ and Millie as ‘Babe’. Arlene Phillips ( Saturday Night Fever, Starlight Express, Grease ) directs the show with choreography by Oti Mabuse (two-time Strictly Come Dancing champion) and costume design by Gabriella Slade ( Six, In The Heights, Spice World 2019 Tour), the UK & Ireland Tour opened at Leicester’s Curve on 15 April 2022 and will continue through to 1 April 2023. The Cher Show  begins with telling of a young child with big dreams, the shy daughter of an Armenian American truck driver, through to the dizzying heights of global stardom. Cher takes the audience by the hand and introduces them to the influ
Read more

July 17, 2018
For the second week running, the Milton Keynes Theatre is overrun by a wave of eighties nostalgia as Selladoor's production of Flashdance The Musical follows hot on the heels of An Officer and a Gentlemen. However, is it nice to have more of that classic decade upon the stage? The answer mostly is yes, despite the fact that the story driving Flashdance is that light and flimsy at times, you just have to sit back and watch the dancing and the bright colours to get you through. Welding genius, Alex Owens, has her sights set for a bigger thing beyond this tired and struggling factory in Pittsburgh.  Hoping to take her dancing beyond Harry's bar, she plans to make big, via Shipley Dance Academy.  Then, also drifting into her life comes Nick Hurley, who initially unknown to her, happens to be the factory bosses son, the scene is set for romance. Flashdance has a generally excellent cast led with a tremendously good performance from Joanne Clifton as Alex Owens. Those famili
Read more

Review of Constellations at the Church Of The Holy Sepulchre, Northampton

April 08, 2022
We have all; I am sure, said something that we instantly regretted, or in a tone that we felt could have been better, and this interweaving and fantastical play Constellations , written by Nick Payne, explores the ways one relationship can be affected by just simply saying and doing something in a different way. Payne’s play is an immense achievement in the clever scene and character creation, and over one-act, leaves an impact rarely achieved in such a short space of time. It is simply a two-hander play charting a relationship over an initial meeting at a barbecue to, well, you will have to see the show to find out where. However, the clever structure actually gives us a glimpse of the end of the play in the second scene, as this play uses parallel universes and bends time throughout. Masque Theatre, like a lot of productions of this play, has different actors performing this play, and the evening I saw this, Brooke Gillingham and James Lickman were the actors portraying the character
Read more