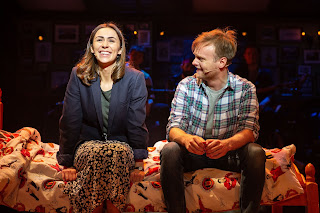 The creators and cast of Once sure know how to get an audience onside as a fifteen-minute pre-show good old knees up was more than enough to get the crowd clapping. It's a noble effort of extra material on what is in itself quite a long show already, but is it worth the effort, or does all this pre-show jollity mask an insubstantial show?

Once is based upon the 2007 film of the same name written by John Carney, and it has to be said it is slight little tale and benefits greatly from the magnificent songs by Glen Hansard and Markéta Irglová. Tale goes as such, Guy (Daniel Healy) discards his guitar and plans to do who knows what, Girl (Emma Lucia) stops him, gets him to fix her "hoofer" and rekindle a romance of old that inspired all his music. However, do the guy and girl fall for one another instead? 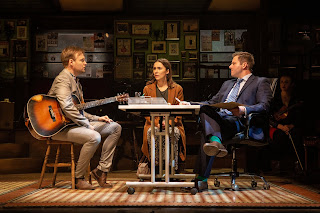 Despite its simple, well-told tale of boy meets girl, Once, even at over two hours is a riveting show, full of invention, big characters and the aforementioned songs. These songs are not standard catchy numbers, although a few you will get into your head on relistening maybe, they are simply beautiful, sometimes haunting melodies. They are delivered by a supremely talented cast and with some stunning choreography from Francesca Jaynes. For example, you may have to wait a long time before seeing anything as beautiful as the If You Want Me routine. While the tremendously upbeat dancing numbers, along with their musical instruments of the upbeat tunes are top taping spectacles like the cast do. 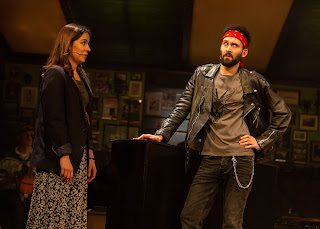 As leads, Daniel Healy and Emma Lucia have perfect chemistry together. You believe their burgeoning relationship, which doesn't feel forced at any time. Both Healy and Lucia have stunning singing voices and deliver the varied styles superbly, while their characters likewise have a likeable depth. I particularly liked Lucia in her straight-talking Czech jibes, its classily written by Enda Walsh, and delivered impeccably by Lucia.

The rest of the cast are of an equal standard and while it would be a delight to mention all, a full talent of 16 strong makes it a tough call. However to pick a few, Peter Peverley was quality in the background of many a scene, Samuel Martin a fabulous turn as the musically deficient Bank Manager, and no question Dan Bottomley as Billy stole every scene he was in. However, as I say, everyone is brilliant. 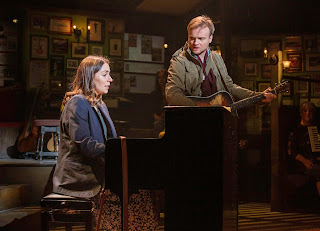 Direction from Peter Rowe is brilliant, one of the best I have seen for a while. The fluid scene changes, natural and in character (I saw some brilliant exchanges hidden within them between the characters), and for such a large cast, beautifully blocked. And the words "beautifully blocked" together is a first for one of my reviews. However, it was just so well presented.

Bar a couple of lighting and microphone moments, it was also perfect in tech, with a delightful set from Libby Watson as well, with a nice little unexpected trick up its sleeve.

Once isn't really about the story, it's hardly there, but the strength of the characters and the simply incredible music makes this one of the best. I don't have any hesitation in recommending this fabulous show.

A stage musical that everyone with a heart should see at least Once.
⭐⭐⭐⭐⭐ 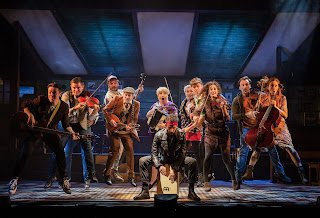