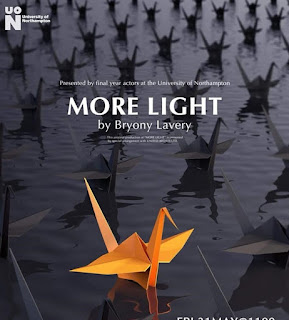 Bryony Lavery's More Light, presented here in London as the final group performance by the 2019 BA Actors of the University of Northampton, is one of the more stranger plays that you might have the opportunity to see. Also despite is strangeness, it is also alarmingly entertaining as well. Although even now, I'm not entirely sure why.

Their Emporer is dead, and these ladies who served him have found themselves confined against their will with his body. However, these ladies do not wish to die, but how to survive? They must eat of course, and sealed in a tomb to the great Emporer, what is the only thing that they can eat? One guess.

It was as I came to write this review that I discovered that actually More Light was originally commissioned as a National Theatre Connections play, and on this revelation, all suddenly made sense. It's an accessible piece, ridiculously odd, but totally accessible, even though you might not understand it all. It also has a very large ensemble cast, 17, another hallmark of Connections, and each of these characters is offered distinct characteristics for the young performers of Connections generally to get their grips on. So, what of these about to be professional twenty plus year olds? How do they fare? Extremely well as expected actually, and Connection plays are really well suited to a group such as this really, and indeed with last years DNA at the same theatre, they have a past form at the venue. 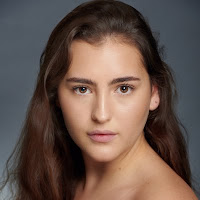 The "leader" of the ladies is the titular More Light, and performed by Bethany Ray, she very much leads without dominating, as at all times Lavery's play is simply all about the ensemble. Her role as the leader doesn't actually always give as much freedom as many of the characters, as these are broad strokes of design, and some are designed to be more interesting than others. 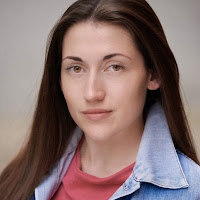 This leaves performers like Katie Glenn as Pure Joy and Sarah Awojobi as Playful Kitten the much better chance to make an impact, and they do when they become the centre of attention. The audience probably gains the greatest "joy" from the moments where Glenn's character is driven to the front of the scene by the script. 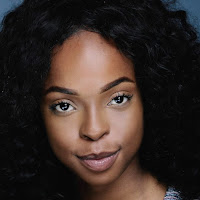 Awojobi also has one of the best scenes with Lyric Impraim as Young Friend, as they battle mischievously over the lantern. It's such a simply constructed scene and beautifully played by the two.

Other highlights from the piece are Esther Batholomew's Many Treasures and her culinary skills, and there is a really fabulous performance once again from Amy Jane Baker as Love Mouth.

However, these are all personal picks, others will find their own favourites in this production as the ensemble as always works as a whole superbly, making no characters irrelevant.

Technically and visually it is magnificent. Meryl Couper's set is nothing special just functional, screens and small seating blocks, but this, however, allows her staggeringly gorgeous costumes to dominate proceedings. They really are truly beautiful, and this mixed with the makeup makes the whole piece really wonderful. James Smith's lighting also draws the warmth, and the darkness at times of the Chinese world into being as well.

More Light is a very different play, breaking the traditional mould a great deal at times, it is though totally entertaining in a weird way. It allows the cast great scope for showing their abilities, and this they do with abundance. A really oddly entertaining play, extremely well presented.

More Light was one of three shows performed at Jacksons Lane Theatre by the University Of Northampton BA (Hons) Actors from Friday 31st May to Sunday 2nd June 2019.