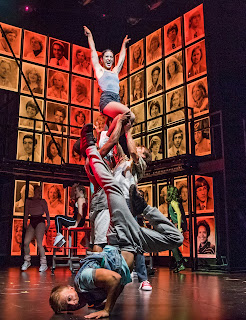 Thirty-nine years after the instantly successful film of the same name debuted at cinemas, Selladoor Productions brings this touring production, headlined by Mica Paris and Jorgie Porter around the country. However, throughout the whole production, even this forty-odd-year-old who watched the spin-off series, and yes, probably enjoyed it, wonders, what is the point?

Fame, the musical version, first on stage in 1988, is not the film of the same name. While the format, auditions, freshman year, etc, and the iconic Fame song are here. Very little else from the film is, music and characters are different, the storyline is reworked, it's a sort of Fame hybrid. That doesn't really matter to be fair, each year would be different. New keen students would bring new tales to the Fame Academy each year in any case. In fact, this musical, conceived by David De Silva, with a book by Jose Fernandez, lyrics by Jacques Levy, and music by Steve Margoshes, lives in a world where the Fame film actually existed, as slyly remarked to cuttingly by Miss Sherman (Mica Paris). 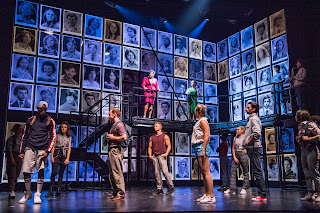 The problem with Fame is that it feels so much trapped in the eighties, it feels as if it is living still on stage to pander to my own generation and provide a bit of retro feeling. Unfortunately, unlike many things from the eighties that you might have a retro feeling for, Fame doesn't provide it. It was relevant then because it appealed to "us" as we were at that point the age, or close to, of the characters. Now we are old, and if we haven't had that "fame", we probably don't want to be reminded of the fact we haven't. Also, while High School Musical may have been a copy of the theme to a certain extent, it's more relevant to a modern audience (even if it is pretty old itself now), and quite more importantly HSM is packed with far better songs and is a much better stage show.

So, what of this production itself? At the interval, I and my companion of the evening had decided it was "OK". While I can't get away with that as a review, it pretty much sums it up. It's an entertaining evening, full of energy from the excellent cast, and to be fair, the cast give this show more than the material deserves at times, and that at least is an excellent thing to see. 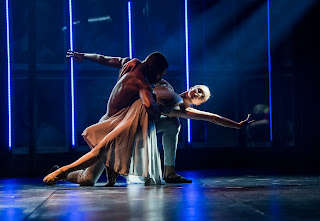 Stephanie Rojas is a superb, full of energy Carmen, spirited and keen, and her descent into sadder places powerful as a result. Her partnership with her "love interest" Schlomo, is perhaps the most interesting part of the story. As Schlomo, Simon Anthony is extremely good in his softly played emotional character. It's a cracking, understated performance, and his final piano scene is poignant in the extreme (but surely could have been better staged? A large number of the audience right of the theatre deprived of his face in this crucial scene).

Hollyoaks "star" Jorgie Porter as Iris, brings much more to the stage than this regular cynic of such "stars" expected. While her character has much less to do dramatically than some, her dancing skills are superb, and her dance routines with Tyrone (Jamel Kane Crawford) are extremely good.  In fact this whole production if brimming with excellent dance sequences unsurprisingly, none better than the opening full company number of the second act.

Keith Jack's Nick is the strongest comic character, successfully stealing most of the scenes he is in whether performing or being sexually suggestive in the background of them. 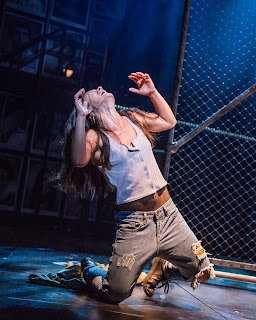 Mica Paris as Miss Sherman is given relatively little to do in the show (and you feel the reason she is given Fame at curtain call is the production trying to balance that out), however her powerhouse performance of These are my Children clearly shows what we are missing for much of the show. Also a little big up to the ultra-talented Louisa Beadel as Lambchops, acting, dancing and playing several musical instruments as well. Awesome work.

Finally, from the cast, there is a gloriously neat and touching performance from Molly McGuire as Serena, probably the strongest character performance, and with Let's Play a Love Scene, the greatest solo of the show maybe as well.

Production and tech are a mixture of successes, following a 15-minute delay going up due to "technical reasons", the opening scene is a weirdly lit opening, and I don't think because of the technical issues, and sound is never right either, with dialogue and lyrics often lost. Elsewhere there are a few blocking issues and from my seat relatively right of the theatre (but not the farthest), a huge totally obscured section of the stage. Pluses though include the superb wall of yearbook images, superbly brought into scenes doing their own little dance. Also, a weirdly pleasing appearance for me of acting teacher Mr Myers (Spencer Lee Osborne) in the stalls, who proved that you always keep acting even when 99% of people are not even watching you and you are not even lit. A nice little touch.

At the end of the day, Fame is entertaining, it's nothing special at all, and tremendously dated in its relevance, but it's OK. Key to you as an audience member is whether "OK" is good enough to warrant your time and money, and only you can decide that one.

Entertaining, but devoid of the catchy songs needed to make a show fly. 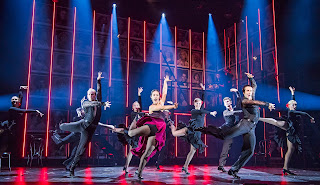