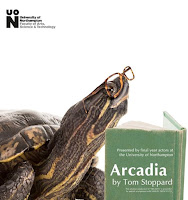 Ahead of seeing Arcadia in this University of Northampton production by the Third Year BA Actors, I had been warned that it wasn't a play for everyone. It makes sense in retrospect, it's a bit clever, making you always feel as if you are not as intelligent as you hope you are (in my case, probably a fair point). However, despite this, the young cast in this production make Tom Stoppard's ever so clever play entertaining from beginning to end. 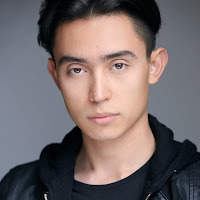 Thomas Van Langenberg has tremendous fun as Septimus, teaching and flirting with his pupil Thomasina, played to playful perfection by Abi Cameron, demonstrating perfection in playing below your age. Their scenes together are never anything less than hugely entertaining. 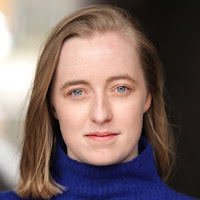 Modern day, and Daniel Hubery slots into the role of Bernard perfectly, sparring with his compatriots and being more than a bit creepy at times. Almost typecast again, Hubery has the niche, and I think it will take him far in the future. Kit Wiles is equally excellent as the forthright novelist Hannah Jarvis, while Chris Cutler is suitably impulsive and more than a little wild as mathematician Valentine. 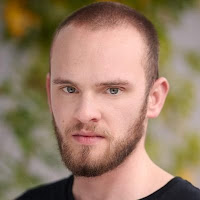 It's actually as ever a brilliant cast, even beyond the main players, and the dynamics that all of the performers get with one another really are excellent, and perhaps maybe makes this play a little bit better and more entertaining as a whole. Taking a little of the perhaps poncy, knowing nature out of it, and making it more fun.

Visually it looks superb, with sharp detail to the set from Meryl Couper, columns quickly becoming creepers, and as well as this, its superbly dressed from costumes through to some fascinating and very nice props. 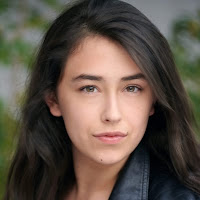 I really enjoyed some of the bold direction from Tobias Deacon, allowing actors to perform naturally, often in profile centre stage for some time. It's not for everybody like that, but I like it, it's better to have something look more natural at times.

Arcadia is an interesting play, and that's being nice. I can't say I didn't enjoy it, as that would be a lie. I've seen better, but I've seen a lot worse, and here, the main thing is that the cast in their final group performance together did themselves proud, and that's the important thing here.

Red Velvet was one of three shows performed at Jacksons Lane Theatre by the University Of Northampton BA (Hons) Actors from Friday 31st May to Sunday 2nd June 2019.