Review of The Worst Witch at Royal & Derngate (Royal), Northampton Jill Murphy's The Worst Witch first appeared in print in 1974, bringing its tale of an academy for witches to the first of a few generations. It was a long time before a certain boy wizard made his first appearance in a school of his own, and doesn't Emma Reeves, adaptor for the stage, know it. There are many a jibe at the HP universe in this stage version, that even I, someone who has never read or watched any of them (yes, really), could pick up.

Mildred Hubble arrives by mistake at the wrong university, a "normal" or "pleb" far removed from the rest of the students at Miss Cackle's Academy. Here she meets friends and enemies, and a certain evil twin bent on world domination.

Reeves' adaptation starts off slightly shakily as we are presented with what at first threatens to be a cheap rip-off of the mega stage hit The Play That Goes Wrong as we are introduced to the premise that this is a play put on by the students, complete with copycat stage management screwing scenery back in place. Fortunately, any thought of this becomes null as void as the production quickly takes its own course and introduces us to a collection of quite brilliant personalities. All these characters are incredibly well created by the all-female cast, from students to teachers, each character a brilliant creation in their own, including the trio that spends most of their time bringing the brilliant live music to the stage. 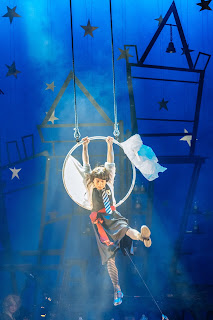 As the lead Mildred, Danielle Bird is absolutely superb, bringing a brilliant quirky and awkward character to the stage, full of clumsiness and a glorious collection of facial expressions. Her partnership on the aerial action with the excellent Rebecca Killick as Maud also brings another tremendous skill to the stage that these talented performers have to have. It's a brilliant moment of stage work, full of drama, but in a very comical way.

Rosie Abraham puts in a real scene-stealing performance as snobby Ethel, the better than everyone else Hallow, or so she thinks, she oozes attitude which you can't help to love at times. I also so want her reference to a broken leg to be a brilliant in-joke to her role in Peter Pan Goes Wrong, but that might be just me. 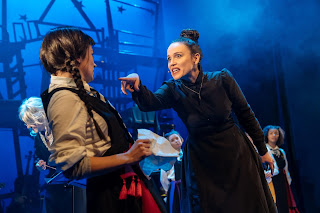 The teachers are performed with huge brushstrokes of character, making them a joy to watch. Miss Hardbroom for instance, played by Rachel Heaton in an intelligently stern style, is a magnificent character to behold, and we all delight at that point in the lab where the exterior is broken just for a moment, before the delivery of the putdown grading switches the character back to form

Even those teachers confined within the excellent three-person band are filled with depth and remain in character even when just being the musicians behind. Megan Leigh Mason as lively PE teacher Miss Drill is filled with enthusiasm "drilling" the students in their exercise lessons, mostly involving their broomsticks, and Molly-Grace Cutler is simply amazing comically and brilliantly ageing up to be the music teacher Miss Bat. She quietly puts in a stunning performance and provides excellent, amusing vocals to boot while playing piano, guitar and cello, often more than one at the same time. 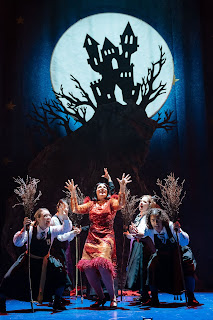 However, Miss Cackle/Agatha played by Polly Lister is where the final remarkable praise must go, as the tea drinking Miss Cackle, Lister is brilliant and amusing, as Agatha, she becomes a scenery-chewing marvel, as both later in the play, is a force to be reckoned with from many a great performance of the past. Simply amazing.

Emma Reeves adaptation is slick and uses every opportunity to make an excellent stage show from the story, not skimping on opportunities as many adaptations can, so, with director Theresa Heskins and Beverley Norris-Edmunds, this becomes a clean and crisp proper theatre show, with no pausing of the action. The comedy is sharp and relevant, there is even time for a Brexit joke no less, as well as the many Harry Potter references, it's literally packed with laugh out loud moments.

Composer Luke Potter has created some brilliant music to both scene set and for the catchy songs to be played out, with a few nice references to more familiar songs. Aideen Malone has also packed the show with some nice lighting, including the magnificent forcefield moment, coupled with pinpoint accurate sound from Leigh Davies. Stylish stuff. 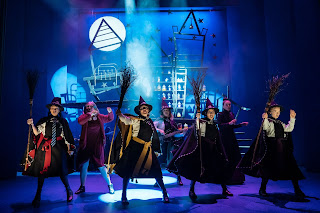 This is the fifth year that I have seen the Royal Christmas show, and I have no hesitation in saying it is by far the best. Eleven brilliant and very different characters performed with style by this brilliant female cast makes it without a doubt one of the best ways to have a trip out this Christmas. It absolutely is for everyone from young to old, and never strays into puerile jokes as is often the case in shows at this time of year, and has the very best use of cats in a stage play full stop. You have a whole month to see The Worst Witch here in Northampton, and then across the country until at least June next year, and you absolutely should seek it out.


A stunning theatre treat! Grab your broomstick and fly to the theatre to see this gem.
⭐⭐⭐⭐⭐

The Worst Witch runs at the Royal & Derngate until Sunday 30th December 2018 before continuing its extensive 2019 tour. Details at https://www.ents24.com/uk/tour-dates/the-worst-witch-touring
For further details about the Royal & Derngate see their website at http://www.royalandderngate.co.uk 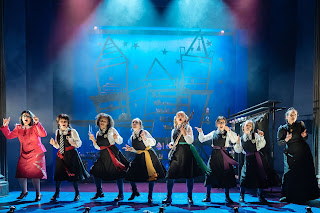