Review of Some Mothers Do ‘Ave ‘Em at Royal & Derngate (Derngate), Northampton 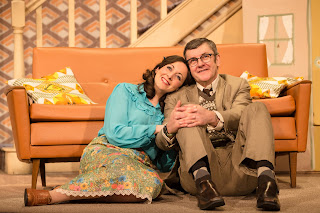 It is hard to imagine what crossed the minds of the producers of Some Mothers Do ‘Ave ‘Em when they decided to recreate a TV sitcom, that hadn't been seen as a series for 40 years, as a stage show. Although the world of entertainment is so full of remake and reboot at the moment, that perhaps everything is doomed to return at some point. However, perhaps few will be quite as successful, and certainly deserve to be, as this remake of something that was so of its time and so much in everyone's memory as being made by one performer, a certain Sir Michael Crawford.

This gem of a stage show though, while never being 100% perfect (it is very sluggish for a while in the opening of the second act and I am not a fan of a play with mics), brings that sitcom to the stage with a style and panache that the frankly (pun intended) ridiculous material of the original almost doesn't deserve. This is Frank Spencer for the 21st Century, the stage might be dressed like that 70's sitcom, all garish wallpaper, Bruce Forsyth poster and record player, but this has been given a top coat of what would make it work for a modern audience. 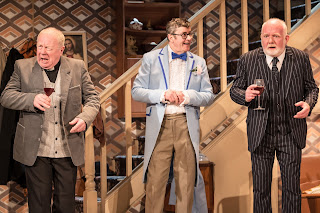 First of all, it helps that writer and director Guy Unsworth has created an expertly refined script, clearly using moments from the original, and keeping those parts of the show that we expect to see, with Spencer's catchphrases pride of place (although no "Ooh Betty!"), his clumsiness, his endearing love for Betty and of course his malapropisms. This whole piece has been created with a watchful eye on Raymond Allen's original scripts, but with Unsworth's careful consideration of what will actually work in 2018. One particularly brilliant sequence from Unsworth makes perfect use of misunderstanding to create some top quality laughs, building to a brilliant line regarding practising on his mother, a little more adult than Spencer of old used to be, but still innocent enough for a family audience. 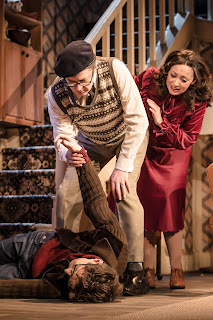 Then we have the cast, with Joe Pasquale at the helm as Frank Spencer, bringing him to life as his own, and keeping clear of nodding his performance too much in Crawford's direction. His voice suits the character perfectly, and his physical dexterity comes as a surprise. His and the rest of the cast's timing is exemplary, and that is no mean feat in this incredibly fast-paced show, this has been clearly rehearsed to perfection. Pasquale also has some substantial monologues, detailed and needing quick delivery, which are also perfectly performed. In fact, while this whole show is a surprise, it is perhaps Pasquale who comes as the greatest. This is an assured performance, confident expert and for anyone who doesn't get Pasquale as a performer elsewhere, you have nothing to fear, he really is quite brilliant in the role.

The rest of the cast are no side players, they are in fact all brilliant in their own respects. Susie Blake as Betty's mother Barbara is as good as her long CV of experiences suggests, with comic timing to a tee and bringing a gloriously sloshed performance as well. She sure knows how to get a huge laugh from just a look as well.

Sarah Earnshaw as Betty brings nice calm to the proceedings as all around her literally collapses. It is a tremendously sweet performance, channelling all that Michelle Dotrice brought to the original. Earnshaw creates a Betty who unquestionably loves Frank, but also at the words of spending another 50 years together, can't help but react the opposite. 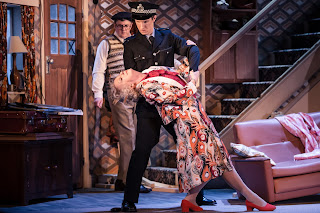 The final trio of Moray Treadwell, David Shaw-Parker and Chris Kiely all capture the essence of the show as well, throwing themselves into some brilliant characters, never quite over-the-top and much more believable as foils for Frank than many of the original series ones. Kiely has a magic moment in a who will corpse the first sequence late in the show, and the audience are well onboard for when Mr Pasquale finally succumbs. It doesn't matter either that this happens, or indeed has already happened earlier, as we the audience at that point are more than forgiving.

Towards the end, and again at the very end, there are two musical moments which frankly (intended again) shouldn't work, as they are well out of character. However, by this point rules are out the window, and I and the audience are loving it all the more and it becomes a surprisingly perfect way for the show to end. 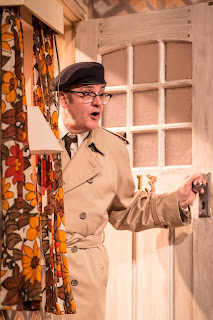 It is hard to convey how thoroughly entertaining this show is, and for those set in their mind, as perhaps I was, as to how bad it was almost certain to be, I have to offer a tip of my beret and an apology.

Some Mother's Do 'Ave 'Em is no landmark theatre production, but what it is, is an extremely entertaining couple of hours of feel-good fun and superbly performed entertainment. Writer and director Guy Unsworth has worked wonders bringing this ancient and dated television show to the stage, and it's totally skilled cast have done him immensely proud.

Madcap, yet surprisingly subtle, this a brilliant return for the seventies sitcom with superb performances.
⭐⭐⭐⭐

Some Mothers Do 'Ave 'Em runs at the Royal & Derngate until Saturday 5th May 2018 before continuing its tour. Details at somemothersdoaveem.com 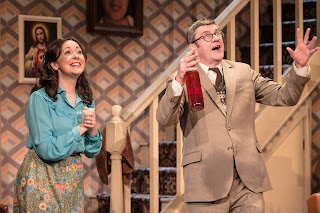