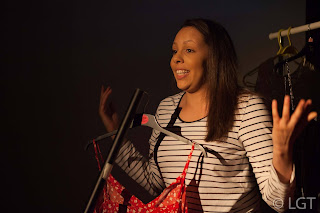 Eight Pounds Sixty from TaBoo Productions is over almost before you get the chance to settle. At 20 minutes roughly, it is the shortest Flash that I have ever seen, however, during that time, it makes a tremendous impact, and perhaps more would have been too much to take.

Solo performer Naomi Ell presents two people, both, it turns out, with a common health link, mental illness. As is sadly often the case, both first present as being well hidden by the individual.

The first Annie, in her twenties, is full of success, her own flat and a job that she mostly appears to like, but has pleasure in relaying the quirks of her colleagues as she clears up her "floordrobe". It quickly becomes clear that there are issues there, she is seeing a counsellor, and although she presents to us the fact that she likes doing so, we all know deep down, seeing a counsellor isn't really a leisure pursuit. She is taking drugs to help her problem and has to mine through a ridiculous NHS system, which includes a survey that is one that fits all, when she, and we know, that is never going to work. We are indeed, all different.

The second character, we are also introduced to, also in a veil of optimism, following a quick change, is Rosie, and she is quickly exchanging light conversation in a jovial manner with a man on the front row, although occasionally distracted by thoughts of her pets. It quickly, as expected, spirals, here at the reading of a piece of paper, referencing Mum and Dad, and we find that life for Rosie, is, well, you get the picture.

Solo shows must surely be one of the greatest challenges at Flash, going it alone, however, they must also be one of the most freeing. You have sole control over the content, and Ell clearly feels for this material, and she is immense in the two roles throughout. The emotional impact is enormous from this piece, the audience found it extremely challenging to deal with around me, and that is a credit to Ell, and the piece she has created.

My only gripe, which is perhaps a bit weird, is that the set was a little too prepared for us the audience. The desk, in particular, was just simply too staged for us the audience, not natural, tablet boxes presented deliberately towards us, booze bottle clearly placed, and even the discarded takeaway box was lovingly "presented". It just for me, took the natural impact of home away for me.

However, that minor gripe aside, Eight Pounds Sixty was performed with true emotion and dedication, it might be the shortest Flash I have watched, but it was still one of the best solo ones that I have seen.