Review of The Last Ship at Royal & Derngate (Derngate), Northampton 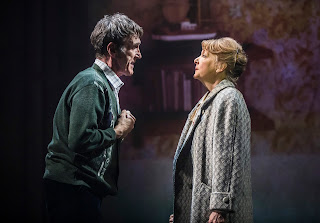 When The Last Ship first launched as a musical on Broadway (adapted from a concept album by Sting), it was received with a mixture of reaction, most thoughts though of the negative nature, the critics especially found the whole thing far from shipshape. Here, having launched in its spiritual home of Newcastle, it arrives in very landlocked Northampton on a UK tour in a very different form. Characters have been dropped, songs have been reordered, storylines reworked, and original cast members are gone. So, whether the US audience would have been appreciative of this new The Last Ship is unknown, however, there is an incredible amount to like from this show and on Northampton opening night reactions, the audience here is liking what they see.

Gideon has returned, having taken to the seas 17 years before, leaving his girlfriend Meg behind and a strong and stable shipyard in operation. On his return, things are very different, not least for Meg, who is initially not keen on his return, for very clear reasons (and dealt with in a brilliantly matter-of-fact manner). As for the shipyard it is doomed, as British politics sails into the slipway with devastating effect.

There is no question that The Last Ship is extremely political, and perhaps at times, it is to the detriment of the show, especially with the overly exaggerated character of Baroness Tynedale (think Mrs Thatcher factor ten), and, then perhaps the over preaching ending from Ellen.

However, negatives aside, The Last Ship is a simply brilliant evening of musical theatre. Big numbers, bold and strong music, nice staging and some brilliant singing, some of which is exceptional. It all opens curiously with the cast addressing the audience, encouraging us into a clapping, tapping frenzy before the show has even begun, maybe some will be discouraged by this, but by the time the rousing full company number What Have We Got? is delivered (not the opening number in the original version), many of the audience were quickly back onboard, including myself.

Leading the workforce in the shipyard, and perhaps most familiar to audiences, is Joe McGann as Jackie White, and he gives an extremely strong performance for the story to build around, a stable grounding of balanced emotion as the rest of the workforce retaliate, and McGann is a delight and surprisingly strong, in for me, an unexpected way in the singing numbers.

Richard Fleeshman is even stronger with those singing numbers as the returning Gideon, a soft and meaningful delivery, full of emotion, and he is exceptional in one of my favourite numbers from the show, The Night the Pugilist Learned How to Dance, lovingly staged as well with the young Gideon and Meg dancing gently in the background, their love developing.

Continuing the strength of performances is a brilliant impassioned one from Charlie Hardwick as Jackie's wife Peggy. Strong and ready for battle against the shipyard boss, and full of engaging emotion in her standout number Sail Away. Top of the class in the singing ranks though is the absolutely incredible Frances McNamee as Meg, gaining gasps from the audience in her delivery of If You Ever See Me Talking to a Sailor, quite frankly an incredible performance.

The whole cast brings so much to the show that it is hard to mention all of the great little performances, Katie Moore gives a sweet little persona to Ellen Dawson, who also acts as a narrator to the proceedings. I also found great entertainment from the literary brain of the workforce, Adrian Sanderson, played with great comic timing by Charlie Richmond.

Technically, The Last Ship is an incredible show, with 59 Productions having created a dream collection of projections. Overlapping one another, as great cranes sweep across the skyline, and also amazingly bringing deep 3D environments to the stage, the church scene, in particular, is a work of wonder. I have seen projections in the past be a cheap and lazy way of creating environments (and often looking cheap as well), but not here where they complement the amazing solid set to create an amazing package.

The onstage band (not in the curiously open empty pit, another reference to political closures?), belt out some brilliant numbers and musical director Richard John doesn't shy away from getting in on the action with his obvious enthusiasm. There is some nice choreography for many of the numbers, going for the strong, stomping kind, in keeping with the rugged workforce style. I noted also the boldness of some of the scenes, played and held out in profile, I often find that while directors force the issue of getting the cast to look at the audience at all times, it can frequently feel unnatural, so when this happens, I applaud the courage of the director (Lorne Campbell, who also wrote this new book).

Lighting is top notch as well, and while the sound is mostly perfect, there is occasionally balance issues, making some of the really strong accents disappear sometimes. There is also one spoken scene between the workforce and the boss of the yard which has music played in the background at too high a level.

The Last Ship for me is an excellent evening of entertainment, it peaks in the first half, using its best songs before the interval, however, so much is so entertaining before that interval, that it carries the slightly disappointing second half. It won't be for everyone, but from me, it comes very recommended due to some brilliant songs and performances, and a simply incredible design.

The Last Ship runs at the Royal & Derngate until Saturday 28th April 2018 before continuing its tour. Details at https://www.thelastshipmusical.co.uk/ 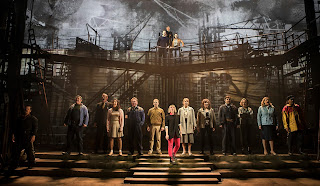