Review of This Evil Thing at Royal & Derngate (Royal), Northampton 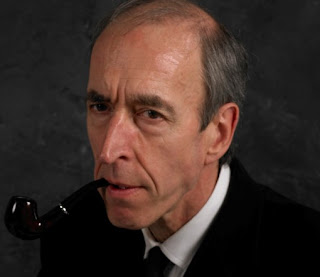 This Evil Thing written and performed by Michael Mears isn't my first encounter with a play about conscientious objectors, however, it absolutely is the most detailed in its explanation of the subject. A clear and absolute labour of love from Michael Mears, and an obviously very personal thing for him, it leaves the audience pretty much in its grip for the whole of its 80 minutes.

Almost uniquely, our performer Michael Mears is in the theatre stalls upon entry, observing the arrival of the audience and indeed exchanging conversation at times. It's fascinating to see a performer not only there, but seemingly so relaxed pre-show and as he bounds on the stage at show start, this little nugget proves intriguing in itself.

Michael Mears is a captivating presence on stage, as previously experienced on the same stage in A Tale Of Two Cities and The Herbal Bed, therefore it comes as little surprise that he has a confident ability to make a one-man show work, and so well. With the use of just simple wooden crates, which often amazingly contain the most unexpected of items as well, he brings a world of wartime and characters to life. Whether switching back and forth to create conversation or cleverly exchanging with pre-recorded material, the flow is constant and you know you are in both safe hands, a master of stage presence in fact.

Of the, we are told 40 odd characters, a few stand out, including that of the preacher and schoolteacher Bert Brocklesby, one of the Richmond Sixteen "absolutists", a term for those that would do nothing in any way to help the war effort, including peeling spuds for the forces. There is perhaps though no question that the best of the realised characters is that of the pipe smoking Bertrand Russell, solid characteristic voice and demeanour, he is also part of the best scene in the play, an unexpected, unprepared encounter with Prime Minister Asquith. It is an imagined exchange verbally from a known encounter, but the scene feels just right, and it is played extremely well.

There is a sprightly nature to the movement of Mears on stage that thrills even sometimes if the piece lulls occasionally, albeit very rarely, and I cannot help but quote my companions thoughts on the night of him having the "moves like Jagger". Its an interesting thought, and does in an odd way capture the way that Mears occupies and controls the stage. His performance is very much more than the words and they way he delivers though, but also the way he makes the stage his own environment.

This Evil Thing does at times ask a lot of its audience because no matter how personable Mears is on stage and how fluid scenes change, there is always a great deal of data to be taken in during this play. It is because of this, it sometimes more of an education lesson than a play, albeit it an extremely well performed and interesting one. This isn't a fault at all, as this play, struck through with a wealth of verbatim material, is here to educate as much as entertain. A vital education perhaps of something that still often goes either not understood or totally ignored for many reasons, including perhaps embarrassment. It is though, a play that all should seek out if it comes your way on its tour.

This Evil Thing performed at Royal & Derngate on Tuesday 14th November 2017 only, but continues to tour currently into December. Details at https://michaelmears.org/dates-for-your-diary/