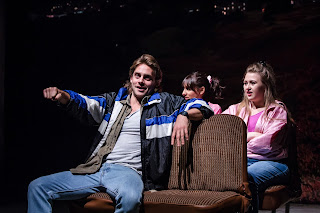 The world of retro and rekindling long past successes and eras is blossoming like no other, however as it builds to exponential levels, I sometimes wonder when we will all find that we are just exhausted from too much of yesteryear? I write this following a day of two theatre trips doing similar things, the first of this a reimagining of a classic eighties play and later film Rita, Sue + Bob Too (more on the other in a future blog).

This is industrial northern matter from writer Andrea Dunbar, full of the grime of Thatcher England, and filled, really filled, with gritty workforce language, Add to this the gyrating backside of Bob (James Atherton) on top of two underage schoolgirls, and this play is clearly not the sort of thing to take granny to see. I have to confess from the outset that this show really didn't work for me, it didn't help that at 80 minutes with no interval, you do feel a little short-changed. However Education, Education, Education was pretty much the same the other week and I loved that, therefore things lie elsewhere in the doubt department on this one as well. 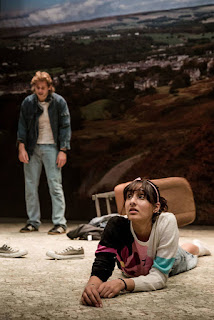 Actually, I have to return to Education once again for my first gripe, and that is of the musical interludes. Where in that, they were not only superbly delivered and felt in keeping with the show, in Rita, Sue + Bob Too, they feel to me just tacked on to make the show different for the stage compared to the film that most will be familiar with. Adding a tick to the checklist of theatre show requirements as it were. It's not to say they are poorly performed, as they are not, and to see father and mother grinding away the dance moves totally in character proves somewhat amusing. However, despite the brilliance of the music (this is my decade after all), for me, they don't work and feel out of place within this comically gritty tale.

Then there is the theme of the play, one which probably as year on year has potentially become more uncomfortable and even more so in the present news world. So as the gyrating backside becomes more present, so did my uncomfortableness of the whole premise and theme of the show. I knew what it was about of course, but didn't really feel I would find it as unholy as I did. Therefore the lighthearted nature of some of the bridging scenes just made me feel more embarrassed of how the theme was being treated
. 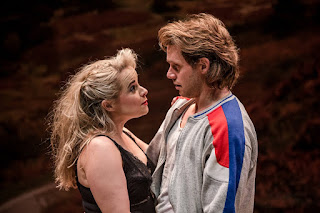 I am not at any point going to criticise any of the performances in this as they are all great in their individual characters, it's just that, to be honest none of them to me come across as particularly likeable. When I feel the highlight for me character-wise is when Mum (Sally Bankes) unexpectedly swears like a docker in response to the constant barrage of Dad (David Walker), I tend to rightfully feel disappointed.

All reviews are personal, however, I have sadly made this one more so, while it is well staged, I felt throughout very uncomfortable of the whole story it is telling, and with this stage show, a little too lighthearted in its approach. I happily want to be challenged by theatre, some of the best I have seen do so, leaving me thoughtful, but the subjects that are tough usually have some payoff at the end. Rita, Sue + Bob Too, has no penalty for any of the wrongs that take place and more so the tone of the staging leaves me cold.

Rita, Sue + Bob Too ran at the Royal & Derngate until Saturday 4th November 2017 and continues its tour into 2018. Details at http://www.outofjoint.co.uk/production/rita-sue-and-bob-too 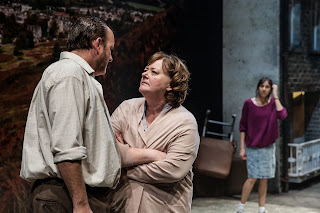