Review of Murder On The Dancefloor at St. Albans The Martyr Church, Northampton 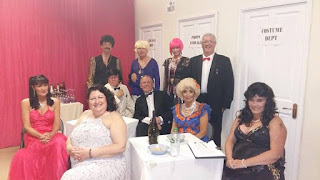 When you see the expanse of theatre that I do, sweeping from the cream of the West End, TV and film, onto fledgeling students, to youth theatre, amateur theatre, huge touring shows, it is quite a challenge to get the balance right in a review.

Most especially when going to a show such as Murder on the Dancefloor by St. Albans Charity Players. This is community, am-dram of the highest order, it is no frills, often loosely performed, but also occasionally unexpectedly very impressive as well. However what is key with this is that you look beyond any flashes of fluctuating quality and step back and see the importance that shows like this have to that community.

Murder on the Dancefloor takes dance show Strictly Come Dancing as its background and shakes an interactive murder mystery stick at it. It is always truly silly, as one of the character names, Crane Breville-Hardwood suggests. It is filled with the most garish of typical dance scene dresses, all overdressed, over made up and blinding colours. Also, those costumes adorn the most ridiculously over the top characters, caricatured within an inch of their lives.

So we have the insanely camp Marcus Hillery played with brilliant relish by Brian Roberts, then the creepy Lawrence Bough (Derrol Barnes) peeping on the ladies dressing rooms, and you have the costume mistress, Roxy Rhinestone (a gloriously bitchy performance from Jerry Delaney). Wherever you look in Murder on the Dancefloor you see the brightest and weirdest people, and for the best part the cast bring them vibrantly to life.

Colin W Gasson's script is clever enough to offer intrigue and it weaved a spell around many present, myself included, who failed to spot the actually rather obvious culprit, despite it in true Agatha Christie style laying the blame at potentially everyone. However, on reveal (once the inspector had got up to speed), it actually turned into a rather good solution, which I was sad to have failed to spot. The event was also enhanced by some lovely little performances from Top Hat Theatre school.

It all created what was a simple, yet thoughly entertaining afternoon. It ended rather dramatically and caught pretty much all of us unawares with the staging, and was a little surreal at times. However, this is just simple harmless entertainment and at the end of the day, something that I enjoy as much as the stars of the big stage. The theatre is at all levels, otherwise, it doesn't exist at all.