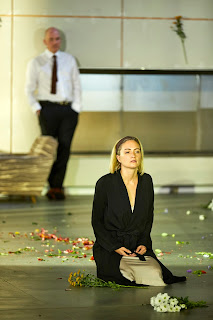 I always approach my first encounter with such well-renowned playwrights with a touch of trepidation, be they Pinter, Miller, Williams or B.G.S, I fear that while I feel I need to like them, simply because, I am concerned that I might not. Fortunately, all of those listed, I have got on with and we don't mention the ones that I haven't. So, anyway, here we are, a few years down the line of aggressive theatre-going, and I come to my very first meeting with the work of Henrik Ibsen. Yes, it's true.

This brand new version of Hedda Gabler for the modern age is by Patrick Marber, a playwright I have seriously loved every previous encounter with. Here he and director Ivo van Hove brings the 1890 original bang up to date, with video entry systems and modern dress to Ibsen's words and a collection of other modern tinges.

At the heart of Hedda Gabler is, unsurprising, the title character, a nasty, strong, yet also a childlike character in equal measure. I like my own child reference, simply because I imagine Hedda as a youngster pulling legs off spiders in her early days of spiteful and wickedness. In the hands of the highly capable Lizzy Watts, she also brings a nervy movement to the role as well, twitching about the stage, with arms flailing, it is as much a physical performance, as a verbal one. I have always championed female roles in theatre, mainly because there are so few of them, and in Hedda, this is a real diamond of a role, although far from endearing. Watts though commands the stage at all times, even when surrounded by a number of the equally strong male characters.

Elsewhere, I was not totally convinced by Abhin Galeya in the role of Tesman, at times he was perfect, in the cool, calm conversations for instance, but then in moments of higher drama felt curiously cartoonish and overplayed, and occasionally very silly. It perhaps didn't help that some humour feels sledgehammered into this at times, the worse given to Tesman, trying too hard to create mirth, when we should only be feeling the tension. Adam Best as Brack though is very impressive, and part of the most uncomfortable scene in the play especially, as he sexually and suggestively tortures Hedda with his can of juice (not a euphemism), Hedda clearly at this point has become trapped in her own manipulation games. It's powerfully and forcefully played by Best. 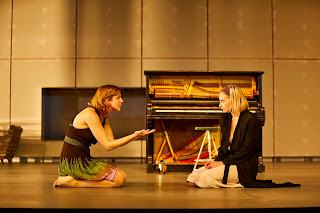 Hedda Gabler leaves me a day after unsure whether I will gell with Ibsen as much as I have others on the list above, however, much of that I lay at blame of this production for now. Some of the stagings is at times a little obviously "National Theatre", with slightly overexaggerated visual metaphors going on, the window boarding for example. The stripped back minimalist set offers plenty of space for the characters to move about on, but this creates a tremendous amount of travelling to contend with. Added to this, the theatre aisles are used for entry and departure of all the characters, with only Hedda and Berte, the maid (Madlena Nedeva) not getting an opportunity to leave us, creating moments when openly armed characters await an actor trying their best to get up the aisle in sensible time.

Director Ivo van Hove also has a habit of using the extremes of the staging for many sequences, some very long, therefore we have great chunks where the audience has to divert all its attention to activity pinned right to the edge. It is a little gimmicky to my liking at times. There are moments of brilliant drama though, the dramatic sequence featuring the flowers is sublime, while the final scene is powerfully created, and strongly performed by Watts and with cleverly underlit walls The other characters all spectators on the carnage like they are just gathered around a sofa watching a film on a 42 inch TV. A lot of the drama of this though feels destroyed with Tesman's simplistic response, leaving many of the audience laughing at what feels the most inappropriate time possible.

Another powerful but non-human character in this production is Jan Versweyveld's lighting (and upon his own clinical set), which oozes around the play like a living being. Bringing light from clever angles, and extremely specific ones at times. It bounces colours around the initially stark walls of the set.

Summing up on this one is a curious job, I did very much enjoy it, but was at times, often left feeling as if I hated it as well. It is at it's best in the first act, before there becomes such an abundance of so-called clever moments of staging and odd humour. Also, I don't think I will be ever keen on seeing the cast of any play bringing parts of the set through the theatre and getting the Black & Decker out because despite not knowing Ibsen hardly at all, it still doesn't feel very Ibsen to me even at this embryonic stage. Definitely worth catching, but also expect to dislike great chunks of it as well.

Hedda Gabler runs at the Royal & Derngate until Saturday 2nd December 2017 before continuing its tour in the new year. Details at https://www.nationaltheatre.org.uk/shows/hedda-gabler-on-tour 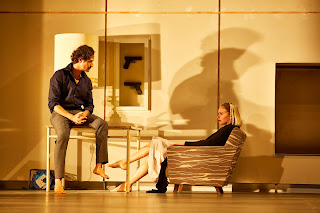