Review of Chatroom by Illusion Productions at The Playhouse Theatre, Northampton 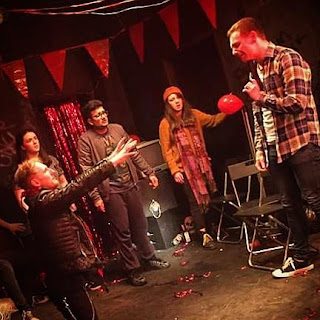 Hot of the heels of bringing Alan Bennett's The History Boys vibrantly back to the stage, director Gary Amos returns with his newly created theatre company, Illusion Production and a very different version of Enda Walsh's Chatroom than many would be familiar with.

Chatroom is as standard, a relatively static play to handle directorially, formed of conversations online from your typical caricatured people that might lurk on them. So, to create some drama into proceedings, Gary Amos has taken the decision to totally destroy the concept of the original play and bring all the characters together in a dead end club. If destroying the whole original premise sounds drastic, perhaps it's because in theory it is, and I did have more than a minor concern about it as I sat in the theatre watching. However, this production gets away with it by the sheer bravado of the scenes it creates because of it's reckless disregard of proper form.

It's a tough play to watch, mixing repulsive bullying sequences which drive, spoiler incoming, one of the characters in the direction of suicide and pretty much the rest of the play revolves around the manipulative and vicious William, played with impressive presence by Lee Maynard. It is a role that you absolutely have to hate at all times, and Maynard captures him perfectly, be it in the psychological manipulation of other people, or with this play turned on its head location wise, the outrageous physical aggression he exerts. This is a play staged on the edge of danger, with huge physical ambition from both director and his willing performers to make the audience, especially in the front row, occasionally fear they might be in on the action at any point, but in actuality you are confident that this is all precisely and safely planned.

Where William is very much the creator of the carnage, the victim of it is Jim, a perfectly cast Daniel Bolton, a troubled youngster looking for help, yet just finding himself in the clutches of bully William instead. Bolton is as strong here as he was in The History Boys, albeit in places a very similar feeling character at times. However, that is no bad thing, as is superb with the affecting and gentle portraying of both characters.

William in his rampages finds a willing ally in the form of the Eva (Clare Balbi), someone also needy and desperate to feel wanted, so ends up due to this siding with the controlling William. It's a nicely played performance by Balbi, keeping a careful balance between involvement in the nefarious deeds, but with enough room for manoeuvre to make the path to realisation at the end believable. 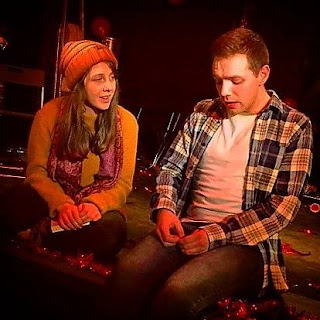 From the other cast members, my favourite was the calm and rather delightful performance from Joanna Wickham as Laura. A role that means little at the beginning, a mere observer, and "listener" as she modestly puts it. However, later the importance of the role quickly becomes clear and Laura becomes vital to the play and developments and Joanna really is quietly superb at it.

Staging is made so much more by breaking the idea of Chatroom, and director Gary Amos brings a flair to proceedings and manages to coax a huge amount out of his cast. There are shades of rekindling moments from The History Boys, with the staging of sequences like the ringmaster scene feeling very similar in approach, but very welcome. And while music is played throughout the play, something I am far from keen on personally, it is this time in keeping with the location and unlike some shows, doesn't distract greatly from the dialogue.

So, once again, an impressive production from Amos and a great start to a new theatre group. There is no question that I shall look forward to what this company brings to the stage again in the future.


Chatroom was performed at The Playhouse Theatre, Northampton between Thursday 23rd and Saturday 25th November 2017 only. Details of Illusion Productions can be found on Facebook at https://www.facebook.com/illusionnorthampton/ 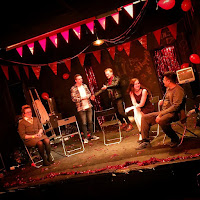