Review of Bombshell by Contact Light Theatre at The Playhouse Theatre, Northampton 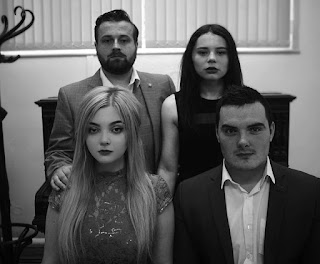 Whether it is an overwhelming success or mostly a failure, I have over the years grown a huge affinity for fresh new work on the stage. The need to regurgitate and rework old pieces continuously may well get easy bums on seats, but at the end of the night, it has no doubt pleased a few but it hasn't really made any future impact on theatre of the future. Presenting a new play and new work, however, who knows what it might have seeded in the years to come?

Therefore as I watched Bombshell, not only a new play, but also the first offering from a new theatre company, I was thrilled that first of all, it leaned much more towards the success line, and also that over half filling the theatre, it had also put quite a few of the bums on seats as well.

Curiously I have recently read Festen by David Eldridge, and while Bombshell goes much its own way, I felt early on, I (and perhaps others in the audience), felt I had a distinct advantage over some of the routes that this play by Mia Ballard and Jasmine Hudson was going to take.

Our characters laid out before us quickly and concisely as a one-act play needs to, are the mother Collette (Mia Ballard), her children, Pandora (Jasmine Hudson) and Dan (Cam Conway). Add to these the politician, and as he likes to say, a man of power, the new man in Collette's life, Jon (Chris Lynch) and you have the ingredients for intrigue.

While Bombshell is a short single act play, compactly constructed, it could perhaps at times benefit from a little more light and shade, as it is unremittingly grim. Intentially perhaps, and maybe it's brevity doesn't give it any chance for any lighthearted moments, however, I feel there might be a chance for a few minutes at the start to give a little calm without breaking it's one act structure.

There are though from this first time offering some quite brilliant little moments that show that there is tremendous potential from this group in the future. There is a sparkling scene of full-on aggression where Collette confronts Jon when the truth is revealed and both Ballard and Lynch play this superbly, creating real emotion and drama right in the front of the audience. There are some telling lines also from Jon, which resonate an awful lot now with news of people of power and their control. It's the best scene in the play for a number of reasons.

Less successful for me is the character of Cam, not laid totally at blame of Conway, but more in that the script doesn't always feel the balance gets it correct for him. We have to believe that in a fit of rage, he collects Josh, brings him to the house and stabs him to death in the entrance hall, and then later, the best he can do is eyeball Jon to death in a full-on man-on-man moment of brawn. He obviously can't do away with Jon at this point for the sake of the story the play continues to tell, but after the bloody results earlier, this is just children's comic book aggression which simply feels weak on the back of what his character has already shown he is capable of.

On the technical and staging side, I felt that often this was brilliantly handled. Lighting ideas especially were often excellent, I loved the use of the quick switching red light during the stabbing scene and using just the central light for emphasis on the flashbacks made a clarity to the scenes we were watching. While it was only used once, the freeze frame scene switching to the right of the stage was also a nice touch.

There were definitely a few moments with this new production that I had issues with, the ending is rather curious especially (a second act?), however I have to say that not only did I enjoy pretty much most moments of it, but it, more importantly, came as a surprise at how good it actually was. I knew little going into viewing it, a thing I always delight in, and left extremely impressed by how great it generally was. A pretty classy first creation from Contact Light really.


Bombshell was performed at the Playhouse Theatre, Northampton on Saturday 18th November 2017 only. Details of Contact Light Theatre and Productions can be found at https://contactlightproduc1.wixsite.com/theatre