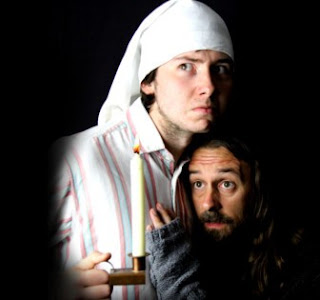 One day I am reviewing the National Theatre touring production of Patrick Marber's version of Ibsen's Hedda Gabler, the next day it's John Myhill's adaption of Elton and Curtis' Blackadder's Christmas Carol performed by an amateur group, the Duston Players. This is my theatre world, a place of contrasts, and also pressures on this poor innocent reviewer. How can I possibly compare and indeed cope? With much cunning, I set about my plan...

The answer is I don't. No one at Duston Players is ever going to be thinking such a thing can be compared, however, while the quality difference is a no-brainer, it doesn't mean that many of those at Duston Players are putting in any less effort to make something as good as can be. You might even argue that with no pay packet at the end of it, their effort is equal if not more. However, that would also be a lie, as the world of acting is a competitive one, and laziness is not an option. I am today full of the intellect of Baldrick so far.

When I was charged with writing a fake programme biog for one of the characters, a knighted actor, in the play what I directed, Theatrical Knights, it was no coincidence that I placed Sir Tony's first appearance treading the boards for the Duston Players. In my short period of time following theatre, it has become clear that Duston Players, along with groups like St Albans, provide a vital part at the base level of theatre in the town. If that sounds insulting, it simply isn't, as what they do here is give the twinkles of potential often that first moment on stage.

I like to think that Lizzy Watts, currently gaining plaudits as Hedda Gabler, first made her embryonic steps on the stage with a group like Duston Players. These are the groups that are a vital part of the theatre foodchain like no other, that first chance. Much of what I said in a recent review for St Albans Charity Players very much applies here.

The show itself is a nicely entertaining gem, and the writing of Richard Curtis and Ben Elton here is far from dated like many of its time. It's also nicely rude at times, but never such that you don't feel too uncomfortable that there are many children present. It cuts a fine line at times, especially with the sequence of the impressive bull, but we just about make it through. It also just about survives that scene that once seen cannot be unseen, I simply say pants and nothing more and those who witnessed it will very much know, and will probably not thank me for reminding. Nice bravado though, well played!

We have a nice collection of performers including two Blackadder's, of the Ebenezer variety, played by James Burgess, and the Edmund, played by Jonathan Whalley. While both admirably capture the character, I felt that Burgess was the most solid in achieving the original role the most. He is in my opinion, someone who needs to do more stage work, as there is a lot of potential there I feel. Lou Chawner meanwhile was a very impressive Baldrick, not looking as much like Jesus as Sir Tony Robinson tweeted he did, and quite closely creating the original vocal tones of the original Baldrick as well as a whole heap of his mannerisms. I suspect Sir Tony would have been proud.

There was an outrageously over playing performance from John Myhill as the Spirit, and only slightly less so as King Richard IV, I suspect desperately trying to make Blackadder into a pantomime. It's nice to see once again as well, the now re-occuring moment of the writer is the one to forget his lines.

Becki Cockcroft and David James were clearly having fun in the roles of Queen Victoria and Prince Albert and also looking the part with their showing off of perhaps two of the best costumes in the production. I felt that Bex Fey was tremendous as Queen Elizabeth I, managing to handle quite an iconic creation very well. Fraser Haines is, as usual, ridiculously perfect in his trio of characters, although definitely as his best as the stupid Lieutenant George, although this is no reflection on Mr Haines. For me though, perhaps the very best performance, and certainly capturing the original the most apart from the leads was that of Si Wolfenden as Lord Percy and Captain Darling. Confident and strong and every bit the role of old. You were perfect Darling!

I know a lot of theatregoers who would run a mile rather than watch a show like this from Duston Players, and this, of course, is their right and there is no denying that this a very different beast to shows they might see elsewhere. However, for me, it really was an entertaining reimagining of the comic classic, extremely well adapted by John Myhill for the production and with a surprisingly strong cast. The best of the three shows I have seen from Duston Players? Absolutely! This was a delight of an evening, and as vital for the arts of Northampton in theory than anything elsewhere on a bigger stage, as no one truly knows who the young people were either on stage or in the audience and who they could become in the future.

Blackadder's Christmas Carol run at the Duston Community Centre, Northampton between until Saturday 2nd December 2017.
For full details of the Duston Players visit their website at http://www.dustonplayers.org.uk/