July 10, 2017
I first saw a show from Munchkins & Monsters during the 2016 local Northampton Umbrella Fair and their lively tale, Back In Time For Breakfast managed to keep an audience enthralled for an hour in a tent on a swelteringly hot August day, so with that achievement under the belt, it was clear they were doing something very right. As it turned out, the day that I saw this, their show entitled The Reluctant Dragon, the temperature wasn't a great deal cooler, but the lack of the tent meant we didn't get quite cook, even if the performers clearly did during this occasionally very energetic show.

The scene for the performance is set with a simple and clear staging of sheets with cartoon landscape, and puppets and cardboard towers hinting of what is to come. After the piping in of medieval music as we take our seats, our performers of Dale Forder, Hannah Conway and Laura Richardson take to the stage with all the suitable enthusiasm to try to keep an audience of children captivated.

Following a nice little prelude featuring a mini classic medieval adventure, the story introduces us to three dragons, each of which is heralded by each of the performers. Then we the audience are then asked to choose between the three in the most noise wins process. As it turns out the eventual winner matters not (although the kids get the fun required out of it) as all of these pesky dragons are quickly dispatched in some form relevant to their particular skills. This is mainly because this is not about fearsome dragons, but about The Reluctant Dragon, based on the short by Kenneth Grahame. 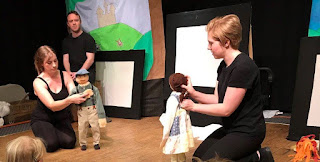 The main story opens with a genuinely delightful and emotional tale of the farmers meeting with his wife to be. Their romance is told via puppetry and it is perhaps one of the parts that are as much for the adults as the children, and this is the part where any truly good children's production works by bridging the gap to entertain both. Moments that crop up later like affordable housing are unlikely to leave little three years old Johnny smiling, but his parents sure will get it.

The tale is told in simple accessible ways, and full of high energy including a surprisingly physical sword scene expertly and very safely performed in the small space available. Add into this water pistols and audience-invading sheep and you have an hour of entertainment that managed to hold the attention of that well acknowledged tough crowd, children. Perhaps at times, the show might have benefitted from a little more dressing up from the performers, although the simplicity of caps worked, a little more might has made it more visual. When we finally encounter the dragon, his glitter encrusted form is a delight to everyone and his cuteness keeps the whole piece in a non-frightening form for all the ages present to enjoy.

If you should have possession of an child to take for an hour of entertainment, there is little doubt that The Reluctant Dragon is going to entertain them, as it kept a good room full happy during the performance. If no such child is available to you, you could always go and sit in a corner making notes and pretending that you are going to review, it worked for me and I am sure that it may well do for you as well. A little bit of childish entertainment sometimes works tremendously well for grown-ups as well.


Munchkins And Monsters have a website for details of upcoming shows at http://www.munchkinsandmonsterstheatre.co.uk/