Review of Hansel & Gretel by Warts & All at Delapré Abbey, Northampton

For those unfamiliar with Kneehigh Theatre (from where this show originally comes), the best way of explaining them is that they do traditional things, differently. This performance by Warts and All Theatre of their adaptation of the classic tale of Hansel & Gretel tells you much of what you need to know early on as a (human) rabbit is pinned down upon a table and skinned (half their costume removed). It is just one of an evening of wacky and quite brilliant moments as this production sours mostly for the sky of brilliance.

Handed to a cast of young performers, the result is often disturbingly professional. Sure it is still rough around the edges at times, but perhaps this helps the material. It doesn't actually matter if there is sparring from the cast with the audience, knowing looks and playfulness. It doesn't matter if one of the cast nearly knocks the cymbal of the musicians flying, perhaps it would have been even better if they had, this is anachic fun at its very best.

This is clearly a polished product, but with the emphasis on joy and fun, and that imparts it on the audience as well. Ninety odd minutes of craziness, sitting in a courtyard of a historic house, with added drone flyover making an appearance, the audience clearly loved every minute as the lady next to me at the end exclaimed "that was brilliant!" clearly showed, and the smiles that people left with.

Performance standards vary, but not one is not putting the effort in at all times. Edward Griggs and Shawne Holland are a great playful and enthusiastic Hansel and Gretel, bringing boldness to their performances and on the part of Griggs, an especially brave sense of danger in his seeking of the apple. It is actually very surprising how tremendously confident in this physicality the show is, the cast often really literally throwing themselves into the role.

The seemingly never resting Luke Nunn, straight from a week run of The History Boys, once again showcases his incredible talent that is sure to take him a huge distance in the future. As Father, he nails a style of delivery and maintains it throughout, pitching every moment of comic timing in a totally perfect way. He is clearly the strongest in the cast, but he never overwhelms anyone and even during the show you get the feeling he is working with the other members of the cast in making their own performances more confident and assured.

Finally, from the cast, special mention must go to George Goodman and his rather delightfully macabre and truly weird Witch. Never have tights been more happily undesirable on anyone, and possibly at no point in history have the nipples of an old lady dropped out of her dress more often. If you think that whole sentence is weird, it doesn't come close to actually experiencing the situation.

There is also some really great music and numbers in this show as well, which become disturbingly catchy and with some of the instruments used (tube and accordion), quite fruity sounding. This is all great work from composer and musical director Katrina Warcaba and the cast performs them with relish, and also give me the curious pleasant treat of singing tents.

Director Christopher Elmer-Gorry uses the fulfilling space of the courtyard well, although it is mostly very central in aspect, however, any disappointment here probably comes from the way that the University of Northampton used the same space some weeks back.

Everything about this show was a wondrous delight, it looked great, it sounded great, it had a wicked and brilliant macabre feel and while I was unsure about a second children's show in as many days, this one was so much more. An unquestionable evening of delight and I would very happily have sat through it a second time.

Hansel & Gretel was was performed by Warts And All Theatre between 9th and 11th July 2017 at Delapré Abbey. Further details about Warts and All can be found at http://www.wartsandalltheatre.co.uk/ 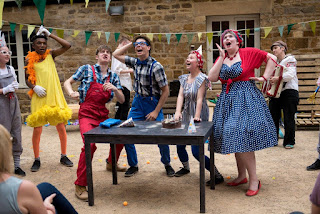