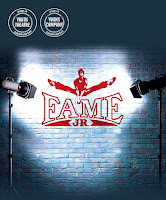 Despite very much being one of the in things when I was growing up in the eighties and definitely seeing on occasion, Fame wasn't really for me. However via theatre of the last four years, I have learnt to love musicals of various kinds more, and the R&D youth company and its companion young company via Sweeney Todd, Honk!, Cafe Crescendo and Oliver! have helped that development.

For 2017 they presented two versions of the same play, the junior version of Fame, it runs for just a compact hour, and while they were dialogue wise the same, directorially and performing was very different. It offered in two days a great opportunity to see the same thing, differently. Even during the opening it was clear that the different nuances were going to be fascinating to look out for, the opening scene sees the students preparing to discover if they have made P.A., and in the young company version the cast clutch their notes and pray to them, while the youth version sees them hidden in their pockets only to be snatched out and opened at song end. If all this sounds a bit of a pointless spot, it isn't, as in reality, it shows the strength and ability of a director to bring life to their pieces in their own way.

The hour is not only filled with these little moments, it also allows across the two shows, different characters to become more prominent depending on those playing them. From the youth theatre version, I particularly loved Troy Anderson gloriously over the top Joe Vegas, full of brilliant enthusiasm and a totally satisfying performance. Likewise, Libby Moore totally captured the persona of Ms Sheinkopf, staying in brilliant character throughout and perfecting the glasses on the end of the nose styling offering great amusement. My final pick from the youth theatre has to be Megan Heavisides-Bell quite scary Miss Sherman, playing the role for me with quite a different feel from Melissa Coulton-McCullough's version in the young company, I was quite glad I wasn't one of her students.

Moving onto the older group of the young company, and the departing Ryan McLean brings a lovely final performance to the role of Nick Piazza, and together with Robyn Wilson's lovely Serena Katz, they made a wonderful pairing. Morgan Charles also creates a bold interpretation of Carmen Diaz and shows some great dance skills as well. Also buzzing with great character is Oskar White's awkward but confidence building portrayal of Schlomo Metzenbeum. Unquestionably for me though the most captivating performance came from Emily Abraham and her really superb turn as dancer Mabel Washington, she is clearly one very much to watch in the future.

The staging and direction from Trudy A Bell (Youth) and Ashley Elbourne were kept simple in the Underground space leaving the actors to do their thing, and while there were a few issues regarding whereabouts you sat, you were never truly far from the action. I did learn though the best spot to be after the first performance and it paid off with a much better perspective on the action.

Fame Jr is actually a highly entertaining hour of music and dance which surprised me as to how entertaining it was. Catchy tunes, well performed by the whole of the cast and full of the usual enthusiasm expected from the young groups at Royal & Derngate.