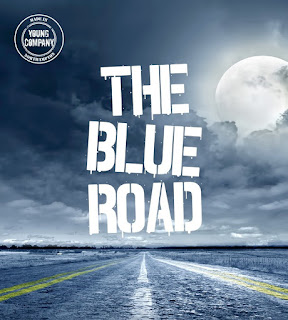 I have a 100% strike record with the wonderful Youth Theatre group at Royal & Derngate, they have never let me down with a show and sometimes with those of Sweeney Todd and Kontact, have provided me with some of the very optimum theatre points of each year. The Blue Road, their very latest production for me is slightly less successful.

However, it thankfully and perhaps not surprisingly, is nothing to do with the constantly talented bunch of actors that gather in this group. My problem lies in two places, of play selection and the way it is told. The Blue Road chronicles the story of a group of young people on the backend of a not totally described crisis, and this, unfortunately, is where we were more or less just two years ago with the Young Company and their show Immune. I have always been interested in these post apocalyptic stories and often love them, however for the same group to do two so close together feels a shame. They challenge certainly, but I am sure there are many other genres or forms of a story out there that could challenge in the same way.

It also doesn't help that Immune of 2015 was a much better play, The Blue Road from Laura Lomas is a curious mix of success and disappointment. Where it is at its best, is when it is simply trying to tell its story and create its characters, some of these are very strong like the brilliant John Reed as the weakling, constantly sickened by everything Thomas. He creates a very believable character during his scenes, portraying perhaps more than any other role, the true horror of waking in a world almost destroyed.

Also excellent is Siena Rista as Katie, who shares a wonderful little scene in the first half with the equally likeable Alex played by Laurence Williams. It's true that most of the characters I actually found quite interesting and yes, generally lovely, considering their dire situation. Sure you would be hard pressed to like Kieran Peace's rock wielding Craig, and the excellent Tabitha Brown as Maja isn't exactly the friendliest to get to know, but like sweet-natured Pia (the delightful Eleanor Bilson) tries to do, let's see the good in people, as in this world they are in, hope is the only thing worth pursuing sometimes.

So yes, much of the time, I enjoyed the company of this band of youngsters with their witty dialogue and toughness in a broken world. However The Blue Road doesn't leave it there, it has an ensemble and a chorus of sorts that intersperse the story as it evolves. Now I love an ensemble, they often provide a life and stirring backdrop for the world we are living for a couple of hours. Sadly, apart from a few great little movements pieces and some excellently worked set change sections, this ensemble mostly sucks the life and momentum from the piece with the dialogue they have to perform. What with this group of people preaching and being all remembering and not remembering for extended scenes, it represents for me some of the worst of theatre plays, boring and repetitive dialogue, pretentious and the sort of stuff I would expect to come out of the National at times to keep the superior feeling top echelons of theatre goers happy and keep the peasants thinking they know nought as they shift uncomfortably in their chair hoping for the scene to end.

I have probably been a little unkind there, but they really do add little to the play and just become boring after a time. Hidden in this ensemble though is some brilliant talent including the excellent Tom Spencer and Ella Broughton, once again showing excellent stage presence. There is also an impressive turn from Martin Delos Santos Beach, appearing mysteriously at the start and opening the play with a great speech, it's just a shame that this is the start of the long scene to stall the show at the very beginning. So, the ensemble is definitely strong across the board, but poorly provided material wise.

Direction though is perfectly fine when the dialogue doesn't restrict it, keeping the play flowing and I particularly loved how the ensemble kept busy as further camp residents, patrolling the perimeters, torches in hand as the human games played out from the main characters. What is also excellent though is a quite incredible set from designer Sarah June Mills, up there easily with some of the most evocative sets I have seen on the Royal stage, it genuinely comes as an amazing surprise on entry to the theatre. So much so that for a while, I thought that broken bridge was a projection before the lighting and removal of gauze revealed it clearly wasn't. It was also a tremendous neat trick to reveal at the end that is also wasn't just cosmetic.

I was surprised that the often constant music track from Andy Cox didn't become obtrusive during the play either, and ended up just being a constant of further tension at times instead. There was only one occasion where the volume sadly caused some of Tom Spencer's dialogue to be lost.

So, for me, The Blue Road is too much of the same from the company first of all, and then too tiresome when creating the ensemble pieces. It also ends rather curiously as we supposedly end the play with a flashback, only to then be concluded with Thomas returning for a point that could only have come from the events of the play. I checked at the end with a couple of other people that it wasn't me being dense, and they felt puzzled in the same way.

While as always brilliantly performed again by the young group, The Blue Road wasn't the finest hour for Royal & Derngate's Young Company. However much like The Grapes of Wrath was an insignificant blip for Made In Northampton, I don't doubt we shall be bouncing back very soon. 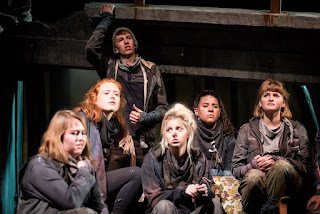