Review of The Grapes of Wrath at Royal & Derngate (Royal), Northampton

May 19, 2017
The Made in Northampton plays are where my tumble into the local theatre world began on 1st March 2014 with a performance of A Tale of Two Cities. Since then I have seen all of the productions in the range (a few more than once), mounting now to a little over twenty. They have ranged from the superb, the excellent and the just really good. Sadly this production of John Steinbeck's classic Depression novel The Grapes of Wrath is none of these things.

Telling the story of the Joad families travels across the Depression laden US from the forcing from their home and a trek to California for work, it offers much sadly to our own predicaments that we still face. Therefore it is ripe for a revisit upon the stage, however, sadly this recreation from director Abbey Wright offers little chance for their tale to be told to us in a coherent way.

Reviewing this production is a tremendous challenge of wondering where to begin, there is just simply so much wrong with it, that I can only assume that the normally rigid quality control team of Made in Northampton simply took the day off when the idea came in.

Perhaps one of the most irritating and bizarre aspects of the play is actually that which rears its head at the opening of the play, live on stage music. Opening with a man playing a saw, which is expertly lit following a tremendously long period of darkness, it perhaps in that brief instant offers promise. Other instruments then join to create Matt Regan's music. It is OK for a period, however, this returns throughout at unexpected and unwanted moments and often due to an extremely poor sound balance, drowning out the dialogue and even on occasion the singing (yes, there are songs in this as well, which are not all bad). It becomes quite frankly a racket, and at the opening of the second act, I almost heaved a sigh of relief that the instruments were nowhere to be seen. Sadly, however, they return in the most distracting way, drum kit assembled at the back of the stage, awkwardly. Symbols, drum and stool lifted up to the top of the vast cabinets that form the set, awkwardly. This whole show is at times a campaign to create a play as distracting as possible from the story.

Those vast cabinets are another ridiculous part of the production. They amount to most of the set, metallic beasts, see through and on casters, they are we are meant to believe forming the world that the Joad family traverse as they are hauled into different positions. In reality, they offer nothing either pleasant or interesting and bring about what I fondly now regard as the Ladders of Doom. At the side and end of each are ladders to the top of these beasts which the cast climb with varying degrees of confidence and ability, but never without horrendous distraction to the audience. The ladders and cabinets single handily destroy the final climactic scene of the play as cast, both young and old are coaxed up the ladders for a scene (an excruciatingly slow one), and then coaxed back down again. Then we have the final dramatic moment played out to the wheeling back rhythms of these beastly cabinets and the most ridiculously amateurish curtain call as the cast shuffle on. Having reached the curtain call, I could stop there myself, however, there is much more.

Other truly weird moments include the car salesmen on stilts, which I have no simple clue on to the reasoning behind. Then we have due to the strange choice of staging and poor costume usage, the most alive corpse ever, in the longest most awkward scene. I am certain that this could have been staged better to make it more convincing, as I have seen it done many, many times much more intelligently.

Despite the staging being in the kindest way unconventional for a 1930s setting, with the bizarre use of electric guitars and modern microphones, maybe we could have a conventional costume design? However not a chance, as we lurch from perfectly pitched period attire onto modern hi-vis jackets, shellsuits and highly fashionable modern day shirts. The final scene also has a boy bizarrely dressed in a Superman suit. These dress anachronisms are I suspect intended to enhance the fact that this story is still being told in our current time, however, it is a clumsy way of doing so, and has little respect for its audience being able to recognise such things themselves.

The cast likewise often fails to impress, accents, even allowing for the travelling nature of the story, are totally all over the place and dialogue is delivered in a constantly dull style. There are a couple of highlights, in particular, that of Brendan Charleson as preacher Casy, absolutely the best-created character within the play. Also, Daniel Booroff creates two genuinely different characters as the slightly learning impaired Noah and later as Weedpatch camp's Rawley. These are a couple of the highlights, however, in contrast, a couple of the actors for me also put in perhaps the poorest performances I have seen on the Royal stage.

While this has quite a large cast, their number are also enhanced by a local community ensemble, and like so much of this show, they feel not only let down by their roles in this, but also occasionally exploited. I know several within this group and they are all better than what they are required to do in this production, amounting to either fixed window dummies for several minutes or performing awkward and stilted dance routines. Nothing within this piece is anywhere of the quality they got to be part of in The Hook emsemble.

Some scenes offer some promise including the bold bathing scene and the arrival at California (and this isn't because it heralds the respite of the interval), however, for most of The Grapes of Wrath, it is a mess of ideas, mostly unwanted and restrictive of the wonder of Steinbeck's narrative. It had to happen perhaps that a Made in Northampton would fail, but I couldn't quite comprehend how badly it would happen. I remain generous though, so it's two of these:
★★

The Grapes of Wrath runs at the Royal & Derngate until Saturday 20th May 2017 and tours to West Yorkshire Playhouse before completing its run. 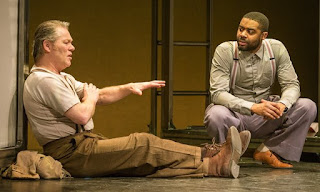