Review of Dinner by Masque Theatre at The Playhouse Theatre, Northampton

May 05, 2017
I have seen two previous plays by Moira Buffini, writer of this dark comedy, they being Dying for It and Welcome to Thebes, and both were superbly entertaining plays with the former the closest to Dinner in its darkness of strorytelling. However for me, Dinner is much more style over substance and portraying quite a lot of what I often hate from many wannabe highbrow plays, pretentiousness.

It's failure for me though comes from the story it attempts to tell rather that the brilliant characters it creates (and brought to life seriously well by this very strong cast). A dinner party from hell is how it describes itself and as it weaves its way to a showy (and yes, unpredictable conclusion) it goes to great pains in showing how clever it is by talking all big existential stuff as death, truth and suicide. I don't think the hell at this dinner party would be dealing with the crazy courses or the dramatic climax, it would be getting through the cleverer than its thinks it is dialogue. 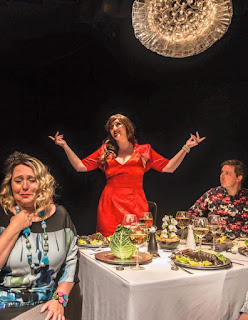 However this all sounds like I hated the play and everything it represents totally. This is not true, as during the two hours we have some really great characters to experience the play through, although perhaps sometimes over caricatured. Paige (Gemma Knight) our dinner host has put on a celebratory dinner for her writer husband Lars (Andy Rowe). Their guests for the evening are Wynne (Victoria Miles), who is unexpectedly missing a partner, and Hal (Matthew Fell) and his girlfriend Sian (Katy Corrie). Add to the mix, the perhaps inevitable unexpected guest, Mike (Chris East) and the menacing specter of the silent waiter (David Chappell) and you have enough character to drive the story forward.

The biggest thrill for me from Dinner was to finally see Matthew Fell on the stage after only ever having seen his work (always excellent) from the director's chair. Managing to act beyond his dazzling shirt (no mean feat) to create somehow an interesting microbiologist. He is also responsible for perhaps one of the funniest scenes, going crazy with his imagined pump-action shotgun. A classic moment. 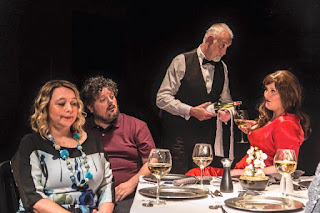 Katy Corrie is genuinely a revelation as Sian, revealing chameleon like capabilities which left me confused for sometime as to whether I had got the cast wrong. It is a devilish performance as the TV "news-babe" bringing to life an oozing monstrosity of menace to both dinner companions and lobsters alike.

As the "happily" married couple, Gemma Knight and Andy Rowe spark off one another with great verve. Knight looking spectacular as our host (as do all in this incredibly well dressed play) attempting to maintain control of her evening. There is a brilliant scene between her and Rowe when dealing with the arrival of Mike, a battle for supremacy indeed.

Victoria Miles as bicycle riding and vegetarian Wynne brings great unwitting humour to the table with her constant distress for all things living being dead. Chris East is perfect as the completely out of place Mike, maintaining hidden meanings throughout his performance as both us and the guests seek out who he truly is. Completing the cast is the ever reliable David Chappell as the constantly lurking waiter. 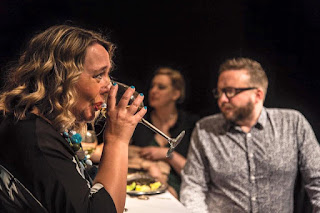 Production is top notch with stunning wardrobe, amazing make-up work and a simplistic but totally appropriate set. It is always a challenge to stage a predominantly table-bound play with its static nature, but the play maintains life thanks to the constant movement of the waiter. I simply loved the scene changing throbbing sound and light pulse, and missed this in the second act when I assume a technical moment reared its head. However it truly was a great little creation as the scene shifted.

However the best way I can sum up Dinner is that it creates a wonderful depth to its characters but they are trappped in a play that is not as clever as it thinks it is. Thankfully once beyond the slow build-up, those characters and some excellent performances and a few funny lines is enough to make the play entertaining enough, if a little insubstantial a meal at times. 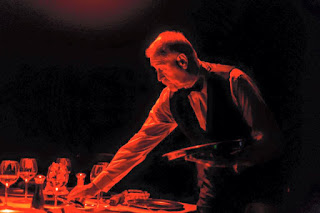