Review of Blood Brothers (the play) by Moulton Players at Moulton Theatre, Northampton

July 13, 2016
Willy Russell's Blood Brothers was the very first musical that I saw live and to see the show minus this music seemed an impossible thought. This was despite the fact that Russell's story of two twins separated at birth is even minus that music a tremendous roller coaster of emotion. I have to admit that for sometime during the early part of the play I was frankly missing the music, even though the integral Marilyn Monroe song is present at the start of both acts. However mostly due to the strength of many of the performances in this production, I was finally able to get into the happy/sad story once again.

At its centre is the turmoil of the life of Mrs Johnstone (a quite brilliant Katie Bunting), dispenser of seemingly endless babies which comes to a head with the news that one is to become two new babes to feed and the eventual events that leave one of them in the hands of Mrs Lyons (Barbara Jackson). 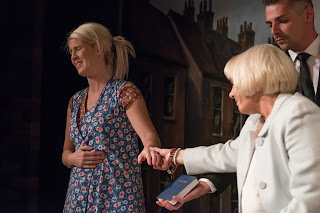 Blood Brothers is a challenging time travelling story progressing through almost thirty years and the brothers themselves, Mickey and Eddie, are an extremely challenging role to perform with the same actors depicting them from seven up to their late teens and beyond. Within these roles though are a couple of some of the best amateur performances that I have so far seen. Jay Lucas as the stray and rebellious Mickey and Neil Brooke as the softy and posh Eddie are never not leaving their roles. Pitching the silly and often precocious attitudes of the seven year olds and the awkward fourteen years old simply perfectly. Perhaps without having the songs to perform, it gives more opportunity to develop the characters mannerisms more, and they do just that as they truly are both brilliant. 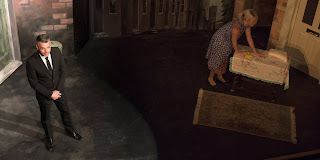 Also a superb little performance is that of Corinna Jane as Linda, at first a playmate and far better shot than the boys and into the latter years, the love interest of both brothers. They form as a trio, a constant delight on stage; playful, clever and despite the challenges of the roles, realistic.

Richard Smith is excellent, clear and crisp as The Narrator, although the role is slightly diminished with the absence of some of the roles key tunes. He like the rest of the cast though sport a surprisingly good Liverpudlian dialect. Completing the cast is the delightful Phil Purkiss taking on a bevy of roles and milking as much humour out of each one. 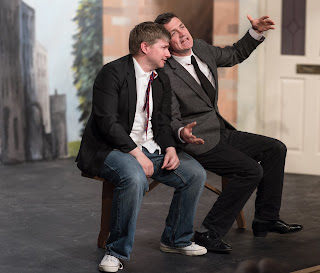 Direction from Lee Winston is seamless, keeping the fast paced scenes moving and with this play, there are an awful lot of scenes to contend with. Never over doing the use of props or set changes, just keeping is sensible and achievable, therefore not making it distracting. One particularly cleverly created scene was the kids gunfight, really well staged and very funny as a result. Indeed the work around the sparing of the two brothers is brilliantly constructed throughout. There were a number of significant changes to the story line, which sometimes worked and sometimes didn't and not knowing the play version specifically, I am unable to comment on whether these are universal or a decision of this particular production. I did certainly feel the denouement on this occasion did not quite work as well as the previous version I had seen. However the strength of the ending still came through despite this. 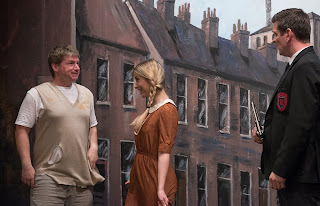 Blood Brothers heralded my very first encounter with the Moulton Players (and indeed my first visit to Moulton Theatre), however on the basis of this, really one of the best created amateur shows I have seen, I feel sure I will return soon. The run for Blood Brothers is deservedly sold out, however if you are able to get a ticket somehow from a return, you are sure of a really excellent night out.

For full details of the Moulton Theatre visit their website at http://moultontheatre.com/
(Photos: Graham Follett)