June 18, 2016
One of the greatest theatre travesty's for 2015 for me was the spectacularly brilliant Anything Goes ending its tour early, despite a company of exceptional talent delivering an incredibly entertaining show it closed four months early. Sadly after watching Show Boat in London this week, I have probably found this years theatre travesty. Yet another show from the obvious talent of production that is Sheffield Theatres is destined for early closure, again by four months, a cruel pattern. True it will have had four months run in London when it finishes, however a production as brilliant as this deserves to run and run.

There is some suggestion that part of Show Boat's early closure is the fact that it doesn't have a "star" in its line-up. In this "star" wording, we are looking at those from television delights like the soaps or X-Factor that would bring the people in their droves, apparently. However Show Boat does have in my opinion far better stars, thirty-one of them in fact. Performers far better suited to treading the boards than the TV studio, and in most cases far, far more talent.

You would probably find no one better to take the role of Magnolia Hawks than Gina Beck, or Gaylord Revenal as played by Chris Peluso, or Queenie as played by Sandra Marvin, to pick just three. Gina Beck in particular in simply incredible, young and playful, old and sorrowful as the story progresses. However it is that voice that delivers in a stunning way, smooth and perfect and so amazingly powerful. I personally have heard few better in my last couple of years and was totally overwhelmed.

Chris Peluso is also stunning in his delivery and his partnership with Beck for Only Make Believe is a certain highlight of the show. Sandra Marvin brings a larger than life personality to Queenie, with three songs of contrasting emotion, my favourite, simply because it was just fun, It Still Suits Me performed with the also superb Emmanuel Kojo as Joe, a very well played naughty old man performance. This was in perfect contrast to his youthful but downtrodden work earlier of that one song that everyone knows from Show Boat, Ol' Man River. He doesn't let the history of the song down, and it is also expertly staged as well, but more on staging later.

Bringing the comedy element to the proceedings are Lucy Briers as Parthy Ann Hawks and Malcolm Sinclair as Captain Andy Hawks. Their marital sparring is a constant highlight, with Sinclair in particular quite brilliant. It's interesting to note with Sinclair has quite substantial programme credits and the absence of the show I particularly know him for, Pie In The Sky in the nineties is a surprise. You have to say, its cleare someone has had quite a career if you can omit a five year prime time show from your CV.

I also greatly enjoyed Alex Young as Ellie May Chipley and Danny Collins as Franks Schultz, who both combined brilliantly in the showtime and bubbly Goodbye My Lady Love, with Schultz showing his dancing talent. Finally of the minor but never inconsequential roles, it was a delight for me to see Victoria Hinde on stage again, playing anything from a town girl to a nun. Having first seen her in Anything Goes, I have to say I just love everything she does. She also takes the ensemble pieces by the horns as only the dance captain should. Just fabulous.

The show itself from Jerome Kern (music) and Oscar Hammerstein II (book and lyrics) and based on the novel by Edna Ferber has after its ninety years lost none of its power. Indeed with that still shocking appearance so casually of the N word, it perhaps feels even more powerful now. The story is strong and sad, but also gives some hope and it is definitely a stronger tale than many musicals of that time told.

Staging and production is all exceptional, director Daniel Evans keeps every scene full of activity and moving smoothly upon Lez Brotherston's quite brilliant set, which arrives in a way very reminiscent of the boat reaching shore, forcing its way into the auditorium. The sound also works perfectly, creating a perfect atmosphere to every location.

However the choreography from Alistair David is where this show escalates into the stratosphere of perfection. Absolutely buzzing scenes of dance delivered upon the stage to perfection by the ensemble. It is as much a thing of visual delight as it is to listen to from the tremendously talented company.

So yes, Show Boat is an exceptional piece of theatre from a non-showy cast just providing there brilliant skills to entertain the audience. There is simply so much talent on stage in this show that it beggers belief and is an incredibly sad indictment of modern theatre and the reasons for success that this is to close early. However that just means that you will not be able to put off seeing it as soon as possible, as you really must. Let me just leave one of the easiest five stars I have had to do, just right here... ««««« 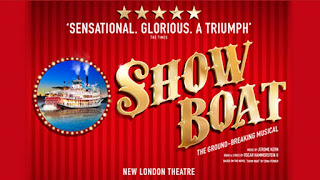