February 25, 2016
Over the last couple of years the National Theatre Connections plays have become quite a favourite of mine. They are short snappy forty to fifty minute plays by often well known writers and are designed purely to be performed by youth theatres. This year locally there are to be 21 youth theatre performances of the twelve plays for 2016. The location venue for this batch will Royal & Derngate at the end of April and just into May and I myself shall do my very best to see as many as possible.

However on Saturday I had the pleasure of seeing the very first preview of Gargantua by Carl Grose by the Looking Glass Theatre in their wonderful performance venue of St Peters Church. Last year I happened to see another piece by Grose entitled Stay Brave, Brian Gravy, which was a tremendously challenging piece for the even younger performers. This was to be quite a bit different.

The performance itself was very much in its early days with an acknowledged number of issues (not least some missing dialogue and a few technical issues sadly suffered on the performance day), however it was never missing wonderful lively performances from the young cast. Each and everyone getting into their larger than life and generally mad characters. This is very probably the strangest Connections play that I have yet seen, revolving around a giant baby born after a two-and-a-half year pregnancy. Not many words could explain how strange this is and it is one of those plays that needs to be experienced to get the absolute madness involved.

Director James Smith has worked the venue of the church well into the performance and will have quite a challenge making it so well involving in the space of the Royal. However what the new place will offer is space, as the small stage at St Peters couldn't possibly accommodate the cast at times (there is a massive twenty of them). The cramped situation did allow the giant baby to appear much bigger than it was, and the baby itself was suitably grotesque and well designed by Mrs Moreton. Standout scene for me and cleverly performed was the birth scene. Utterly bizarre at all times, but also tremendously funny (there may have been tears of laughter).

No one will be singled out performance wise to be fair to all, as this as much as many I have seen felt like a group show and everyone was suitably over the top as the play descended into more bizarre situations by the second.

So yes a preview, and a first one at that, but already its a show with bags of potential which with just over two months more preparation before the Royal performance on May 1st should be made to be a quite mad dummy spitting out delight.

The play will next be performed by this group on the Royal stage on Sunday 1st May, 2016 as part of the National Theatre Connections tour. Tickets via Royal & Derngate will be available soon.
For further details about the Royal & Derngate visit their website at http://www.royalandderngate.co.uk/ 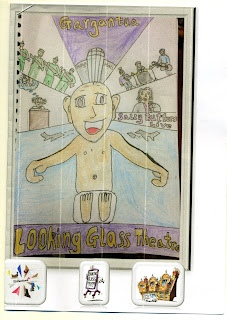