Review of Sleeping Beauty at the Looking Glass Theatre, Northampton

December 24, 2015
I arrived at St Peter's Church for Looking Glass Theatre's Sleeping Beauty slightly jaded and apprehensive for my third pantomime of the season. However I always love to support this little theatre and this years show had the bonus of having a quartet of those magnificent University of Northampton students that I get great pleasure in also supporting. The four on this occasion were Matt Larsson, Tara Lawrence, Nikki Murray, Ashley Thomas Sopher and they made a quite excellent and youthful quartet and showed surprising skills in the challenging art of pantomime (no doubt very useful to have on the CV).

Tara held the obvious affinity for working with children following her Flash Festival success the children's storytelling show and she has that quietly gentle style that offers no menace. Here she was once again joyful and even as a baddie in the second act remained playful. Ashley was quite a revelation as the dame of the show, playing up the part with glee and doing everything required of that pivotal panto role. Like all of the cast he had more than one role, but Nanny was were he had his moments of glory. Matt's best moment was as the wicked witch (another of many gender switches), egging the role with all his might and perfecting the hunched over menace with just the right amount of menace. Nikki's thigh slapping Prince was the role she made her own, dressed as a pirate, but most certainly a Prince!

All of the cast managed to switch between their roles effortlessly and also for Nikki had the interesting challenge of acting against herself in the clever use of pre-recorded material. This was seamless and provided like its use in Hound Of The Baskervilles, a nice added touch.

The set was once again simple, but again everything needed, I particularly loved the collection of painted backdrops. Music by Maurice Merry (recorded by Ian Reily) was also great fun and had a surprisingly retro feel for me. I felt like my old computer from the eighties was playing it and was in perfect style with the fairy tale realm,

Having seen the slightly less traditional Cinderella the day before, it was nice to see adaptor (and director) James Smith's much more wholesome version. I perhaps gained less myself from Sleeping Beauty than that more adult affair, however pantomimes are not for a miserable late thirties man and I looked at the assembled mass of children present and their enjoyment meters appeared off the scale at times, so this was the true success. Their screaming and enjoyment at Beauty transcended what I witnessed at Cinderella and for me that is where the success lies for a pantomime and why I personally feel Beauty is the better of the two.

Sleeping Beauty is on at the St. Peters Church, Northampton until Sunday 3rd January, 2015.

Details of the dates and times can be found at Looking Glass Theatre's website at http://www.lookingglasstheatre.co.uk/ 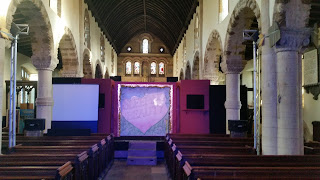