Review of The Strange Tale of Charlie Chaplin and Stan Laurel at Royal & Derngate (Royal), Northampton 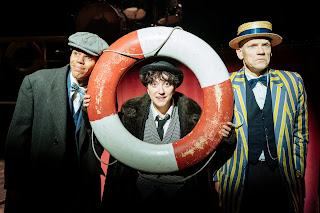 The Strange Tale of Charlie Chaplin and Stan Laurel is perhaps the perfect antidote to the troubled times we are in, harking back to when things were perhaps simpler and mass media and the press were less in your face. Not to say that bigshot Charlie Chaplin didn't make a name for himself in more than just the movies he made. This though is a warm show, filled with love.

This show is based on the very real tale of the 1910 ship heading course for New York, which aboard were Charlie Chaplin and Stan Laurel, unknown, but part of Fred Karno’s music hall troupe, and destined for different, but very major futures.

Told by an Idiot's production with Theatre Royal Plymouth (and Royal & Derngate and Unity Theatre) breaks down the tale of the voyage of the SS Cairnrona with intriguingly created flashbacks of the life, generally of Charlie Chaplin. Therefore along the course of the voyage, we see Laurel's moment as understudy to Chaplin, the birth of Chaplin (brilliantly realised) and his dad, a hilarious moment played by Nick Haverson. It all creates a magnificent potpourri of happenings, presented virtually all in the classic silent film style.

The performers themselves are quite brilliant, capturing the style of movement and delivery of each of their characters. Haverson especially mastering the movement of the choppiness of the mid-twenties frames per second vintage.

Amalia Vitale is very much the essence of Chaplin, perfecting his walk and cane swivelling technics and through virtually no dialogue captivates and entrances as the tale unfolds. Jerone Marsh-Reid equally gets the mannerisms of the legend that is Stan Laurel, representing his dumb look brilliantly. He also has an excellent turn as well as the Bell Boy.

Perhaps although he isn't given either of the main two lead characters, Haverson becomes quite a scene-stealer in all of his moments, from the aforementioned brilliant dad, onto the very Hollywood like Fred Karno, and an amazingly funny cameo at Charlie's Butler. He doesn't, as a result, disappoint at his depiction either of Oliver Hardy himself and his playfulness with the audience during the golf moment is quite brilliant.

Completing the quartet of performers is Sara Alexander who does very briefly feature as Charlie's mother, but mainly shows quite brilliant skill performing Zoe Rahman's perfectly judged score on the piano.

There is some brilliant invention in this show which doesn't shy from interacting with its audience either, including two brief moments of members of it on stage. Nothing to fear though if you are worried, it is gentle playfulness.

The Strange Tale of Charlie Chaplin and Stan Laurel is a gorgeous piece of theatre, stunningly performed with incredible physicality from the performers. Paul Hunter's writing and direction are pinpoint in its desire to maintain period, yet it offers something new and refreshing for the stage and is a clear love letter to a classic time of the film industry.