Review of Alone in Berlin at Royal & Derngate (Royal), Northampton 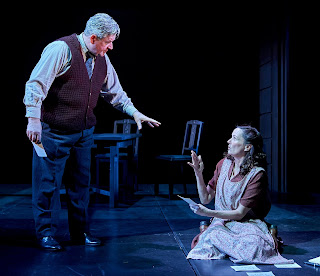 Alistair Beaton's theatre adaptation of Hans Fallada's original book surprises from it's very beginning with the appearance of Jessica Walker as the narrating statue, Golden Elsie, and then for its complete duration makes you challenge everything that you and they in war-torn Berlin lived by. Thinking theatre is often the best, and Alone in Berlin, the latest offering from Made in Northampton (with York Theatre Royal and association with Oxford Playhouse) makes you think more often than many an offering.

The original novel is a sprawling and deep, nearly 600-page, piece, therefore, Beaton makes two main characters our eyes on the world. Otto and Anna Quangel have lost their son fighting in France, and they challenge their own beliefs and the beliefs of the nation with a fight back against what is ripping their country and the world apart. 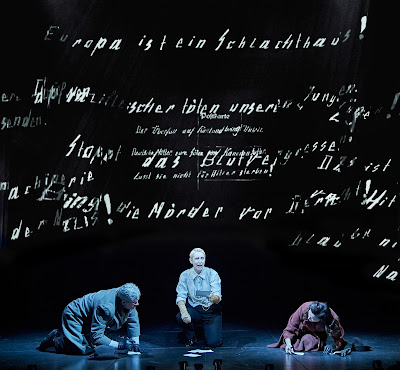 Set mostly within the Quangel's home, this play and Jonathan Fensom's brilliantly claustrophobic set exhibits everything we could try to imagine of this terrible time for those that didn't believe but were so frightened to speak out.

Denis Conway as Otto and Charlotte Emmerson as Anna depict this frightened couple both softly and strong, showing the sadness within them, and the force of freewill that slowly comes out. They are both superb, with Emmerson's strong confidence as Anna the driving of the initial part of the as Conway's Otto battles to prevent his wife from getting them both in trouble for her views. The character development is excellent over the first half for all, and we see Conway create the increasingly more bold Otto in a believable way. 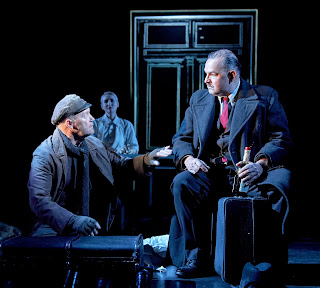 Abiola OGunbiyi is sweet yet so strong as the fiancee of the late Quangel's son, Trudi, fighting the fight her way. There is some good humour to be garnered from Julius D'Silva's spiv Klaus and Clive Mendus' "ladies man and petty criminal" Benno before it all turns dark later in the play.

Both Joseph Marcell as the Inspector and Jay Taylor as the SS Officer are strong in performance, although at times you feel that Tayor's character is more than a little caricatured to lay on the evil of Nazi's too much. It's not as if we need that making quite so broadly defined.
Jessica Walker's Golden Elsie is perhaps the most curious part of this piece and perhaps might divide the audience the most. It's a strong performance as narrator from Walker and echoes the musical Cabaret in looks, and as a more musically knowledgable friend noted, a musical influence of Benjamin Britten for Orlando Goughs original songs, particularly Funeral Blues. For me, it mostly works as a bridging of gaps, but perhaps some of the more non-progressive parts of the songs may have been cut to increase the pace of the whole piece. 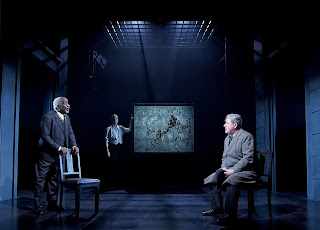 As well as Fensom's brilliant set, Nina Dunn creates a masterpiece of projection with illustrations from Jason Lutes evoking the propaganda style of the time. This coupled with Charles Balfour's lighting creates the most challenging of locals to drive home the entrapment the characters live by.

It's a bold decision to go for totally blind casting in the roles, and with the "blind" accents as well, makes the whole play an equally bold statement in itself beyond the material. There is no question that director James Dacre has found his feet again with this piece, as it rekindles much of the flair that audiences are now familiar with of his work, with sharp scene changes and excellent use of sound and music. 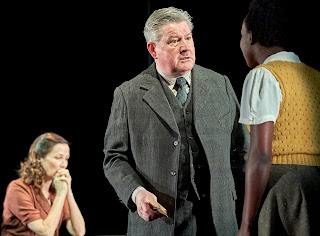 Alone in Berlin is a superb piece of theatre, which while maybe ten minutes too long, does make you think at every turn as the Quangel's and friends battle the demons that surround them in this new world that they were tricked into. It's timely, it's strong, and it really is pretty good.