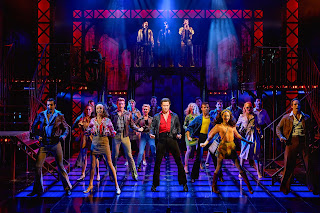 I would like to think that whenever you were born, you would be familiar with the existence of Saturday Night Fever. If you are it would probably be because of one of three things, the tremendous music, the John Travolta strut, or the white suit. However, beyond the iconic badges like this, can Saturday Night Fever still bust the moves in 2019?

By day Tony Manero sells paint, by evening he gets it in the neck from his family, by night he shakes his impressive dance moves at nightclub 2001 Odyssey. In between, he plays for the ladies and gets into scuffs which make him limp before his big dance contest. And yes, that's pretty much the storyline there in this version, that fails to use the strands of the original film to better effect, and pursue making it a feelgood music show instead.

So, you need to decide if you want your Saturday Night Fever to be just about the music, dance, flashing lights and the opportunity for Richard Winsor as Tony to try to out pose John Travolta? If yes, you are in the right place. And to be honest, while this isn't high art theatre, it does make a good night out. 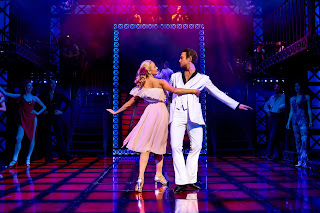 Unlike most musicals, the songs are performed by an approximation of The Bee Gees themselves rather than the cast, providing from up high like the musical gods they are, some of the very best songs of the era. Lead Winsor sings just very briefly once, and three other actors have a solo each, backed often to The Bee Gees. This is indeed less of a musical, but much like the film itself, a play set to music.

However, what music, and how well performed! The small band under the direction of Scott Alder, and The Bee Gees, Jake Byrom as Barry Gibb, James Kenneth Haughan as Maurice and Danny Knott are brilliant and manage to compose themselves beyond their slightly dodgy wigs, to entertain the audience the entire evening.

During all this brilliant music, the cast works hard to make a slight story work around some brilliant dance routines. Albeit routines that maintain quite a similarity until perhaps the final dance contest, where choreography, from Bill Deamer, does get a little more freedom beyond the classic Manero and era moves. 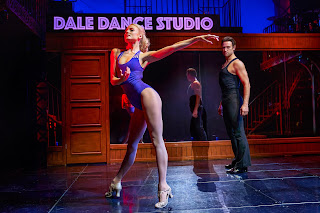 Richard Winsor as Tony Manero works hard in a slight role as an actor, but heavy on dance. Rarely off stage, usually only to change his shirt, he has the looks and the moves to make the role work, and it is hard to find much fault from his performance. Also who doesn't want to be as an actor, a performer who gets a round of applause for putting on a white suit, in a more than slightly provocative manner? Yes, that did happen.

Olivia Fines looks more than the part as Tony's love interest Stephanie Mangana, statuesque and stylish and sublime dance skills. What surprises most though, and sadly so neglected in this show, is her stunning singing voice. In What Kind of Fool, she performs with no question the best solo of the show. Tremendous, and so sad, we hardly hear her sing again.

Natasha Firth also has one of the stronger solos in her role as Annette, the other woman in Tony's life, and the character that in the film has the strongest scene of the original film, but which is somewhat thrown away in this heavily sanitised version to keep the whole piece audience-friendly. It's a nice performance though and her performance of If I Can't Have You is a show highlight. 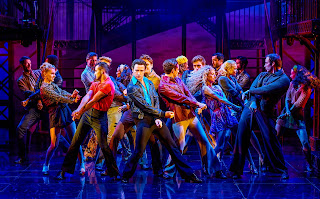 Staging is clever and deals with the episodic elements well, with the flights often in action. The set, and a slightly flimsy fight scene channels the obvious West Side Story influence, just not quite up to those levels. The dance routines are, as already stated, generally very similar after the first moves, but the company performs them brilliantly and although some of them look extremely dated now, they are still great to watch.

Saturday Night Fever is simply a good night out. If you are a fan of the music, and who isn't really, you will I am sure, enjoy the show. It is wafer thing theatre, and not heading for any awards, but the company and leads are strong, and the music makes the night, and no question, it provides a highly entertaining evening.


Fabulous music and dance, but a slight, and heavily sanitised storyline fails to deliver the whole package.