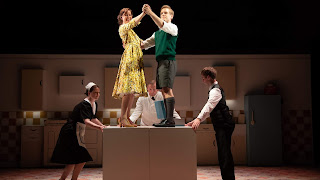 Sometimes in theatre, it doesn't take you long to decide if you are going to like a show or not. Like the opening of a book, whether you try not to judge, that initial moment can decide the entire evening, and with Nigel Slater's Toast, that initial moment is pretty much perfect. However, back to that in a moment.

I confess readers that I did not know of Mr Nigel Slater before this evening, much to the horror of my cooking and foodie enthusiastic companion of the evening. However, this tale of the early life of Slater, bouncing around the sixties and into the seventies, needs no knowledge as Henry Filloux-Bennett's play, based on the book by Nigel Slater himself, gives you everything you need to know. 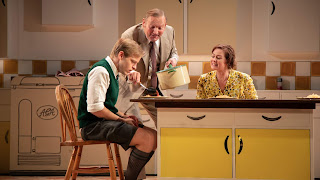 Toast opens to the start of what is to be a glorious sixties and seventies soundtrack and a playful loving sequence of dancing kitchen units as the cast bring us into the world of nine-year-old Nigel. At home with mum, making jam tarts, and of course, waiting for that toast to pop up. It is that glorious opening which settles you in to your theatre seat like an embrace of love, gently also taking in the aroma of toast which pervades the entire theatre. It is a poetic opening, and you are already prepared to give this a rave review.

It helps that it doesn't drop in quality either, thanks to a wonderfully witty script, magnificently staged and fun dream sequences, and a brilliant cast, led by Giles Cooper as Nigel. Given the task of acting in socks and shorts, Cooper draws you in skillfully into the world of Slater, and the things that formed his life. It is a pitch-perfect performance, with Cooper fuelled by a cheeky grin as he happily addresses the audience to tell his tale. 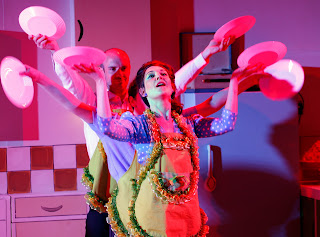 Katy Federman is equal to Cooper as Mum, the guiding light and the spark that would, without doubt, create what Nigel is to become in the future. Blair Plant's Dad is the opposite at times to the tender, the typically strong arm of the family, and at times creating tough scenes within this generally lighthearted tale. Toast doesn't shy from the moments that create Nigel, and things that we can all relate to, but it doesn't overplay the trauma, and while for some, who might think that is a weakness of the show. I feel it is in keeping with what we as an audience want from this show, and without a doubt what the show wants to give us. 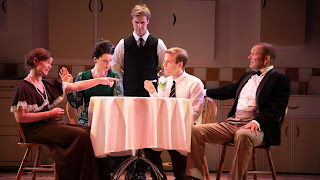 Samantha Hopkins' Joan drives much of the second half, and sequences featuring her character moves the second act up another level of pace, making the show rise like a splendidly made cake. However, Toast, more than any plays I have seen recently, does pace perfectly, slowing down the entire show right at the very end to create that tender and perfectly judged moment that finally fuels Slater's career.

Jonnie Riodan directs almost perfectly, bar one slightly misjudged location of a scene, and with his choreography as well, makes Toast a visual feast. The play certainly knows how to open acts as well, with the second a rather perfect sequence framed by fridge light. 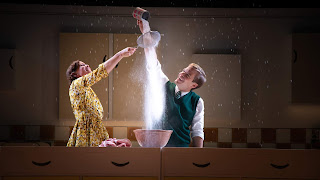 There might be times where I have enthused too much about Toast here, and like food itself, everything is not for all. However, I genuinely challenge anyone to come away from Toast disappointed. It is a piece full of energy, love and just fills the heart. Yes, theatre can and should challenge us, but sometimes it should also just make us toasty with an embrace of love.

Toast gets the starter right, finishes with a stunning desert, and has a delicious main course. You should sample its delights.
⭐⭐⭐⭐⭐

Nigel Slater's Toast is at the Royal & Derngate until Saturday 12th October before continuing its tour. For full details visit the website at https://www.nigelslaterstoast.co.uk/tour-dates