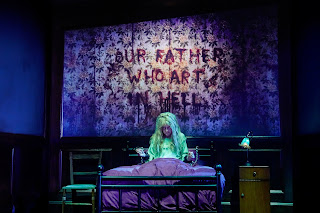 The 1973 film of The Exorcist is famous more for its content than its quality, and few, even die-hard fans would deny it's of its time to a certain extent. It is also a bold film to choose to stage, involving tricks aplenty and a heavy reliance on not turning the whole thing into a farce. So, does this stage version from John Pielmeier (original book by William Peter Blatty) work, or are we in for a demonic night of theatre?

The story, should you not know, is thin and relatively basic, revolving around the possession of 12-year old Regan by a demon calling himself playfully Captain Howdie. It is a sweeping statement to call it a story of satanic child abuse, but that if anything makes it clear to some of the strong content that contains within, and trust me when I say strong.

The first thing to know from this version over the 2017 original London staging (originally performed in 2012 in the US) is that for the tour it has been split by an interval, unfortunately, bar takings count over drama. This cries out to remain as a single act nail-biter, because so much of the first act is strong in shocks and creating tension, that to allow a 20-minute interval to weaken all this, lowers the strength of the second act. Spending this time in the bright lights of the foyer talking about all the tricks that are still to come is sadly a downer on proceedings. 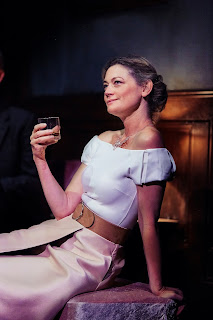 However, getting beyond this, The Exorcist is a rip-roaring version of the film, maintaining many of the scenes familiar to fans of the film, although some are relocated for ease of recreations. We do lose the spider walk however, and the levitation scene has become a simple raise upright from the bed. However, much more is there and much of the rest is very cleverly staged.

The shock and scare value is there however, direct from the quick blast into darkness at the very beginning, to pieces of furniture flying and lights exploding. However, for all the shocks and jumps, the brooding tension works the best. Lightly playing noises into the scenes, and indeed atmosphere building sound as we take our seats helps create unease.

The cast is good, if not exceptional. Susannah Edgley is the best as possessed Regan, dealing with everything the story has to throw at her, and totally believable. It is almost an impossible role at times, but despite much of what is going on around her, you never doubt her performance. For much of the second act, Edgley has the challenge of lip-syncing the recorded words of the demon, and she does this cleanly and professionally. 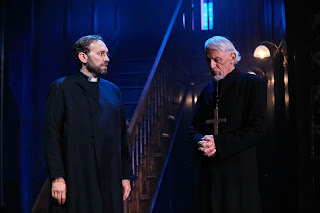 Those recorded words for me exhibit one of the slight disappointments of the play, and no I can't believe I am going to complain about the input of one of our most famous actors. However, voiced by Ian McKellen (uncredited), his voice doesn't really work for the demon and he is simply too recognisable a voice as well. You feel at all times you want something tougher, more challenging from this demon, and Mckellen here is just too nice sounding.

Sophie Ward as Regan's mother Chris MacNeil is a good presence, exhibiting all the emotion of a woman in turmoil as her daughter is taken from her. Tristram Wymark as old-soak film director Burke Dennis provides most of the humour of the show, and always entertains and has beyond the demon himself, the best of the lines.

Sadly I was less convinced by both Fathers, both Ben Caplan's Father Damien Karras and Paul Nicholas' Father Merrin felt more than a little caricatured. Also, Nicholas especially, among others was difficult to understand, putting too much into his accent over clarity. Indeed this whole show, where we were seated front row of the circle was in need ear straining to follow at times. I checked with my companion of the evening to be sure that it wasn't my hearing, and they agreed this was not quite reaching us with any form of confidence. 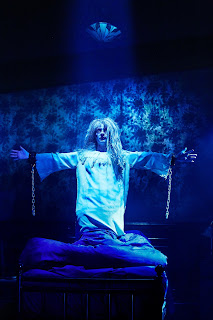 Staging is good if a little odd at times. The set from Anna Fleischle looks fabulous in places, Regan's bedroom and the staircase to her bedroom, complete with a stain-glass window at the top, looks great. It does, however, have a rather strange tilt towards stage right, so, for those planning on booking, choose a seat audience left looking at the stage for the full benefit. Lighting is atmospheric from Philip Gladwell, but read into that, very dark at times, so, like some of the speech, if you find yourself a little way back, more straining may be required to see some of the action.

The Exorcist delivers everything you would expect of a stage adaptation. Most of the tricks are there, and for a touring production, they are generally recreated well. You might miss some moments from the film, but I doubt fans of horror would be totally disappointed, and it is a genre rarely exploited in theatre, so, for that at least, worth seeing. It is maybe not as frightening as you might hope, my hardened exterior didn't really jump much (this from someone who once had nightmares from an episode of Bergerac), and tension was limited. However, there is much to enjoy from this production, and if horror is your thing, you should catch it.

Atmospheric and filled with neat tricks which do the original book and film good service.