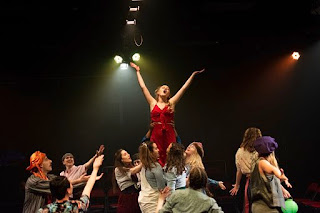 Five years ago, I hadn't seen a panto since I was the proper kiddie age to appreciate them, and they hadn't been something missing in my life really. Even the first few I saw as a grown-up left me mostly cold, and teeth gritted at the whole experience. However, I have now seen rather a lot of them, supporting the many groups and collections of actors that I follow, and have started to acknowledge their importance in the theatre world for both actor and first theatre contact for many a person and more importantly, child. Last year, the University of Northampton BA Actors course also got in on the act, introducing Christmas shows to the mix, one of which was a pantomime, of variable quality, as the course itself got to grips with the situation. 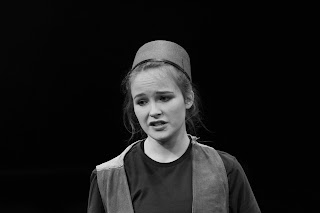 This year, they return to take up the challenge once again, and clearly having learnt much from last year's first attempt, bring a much more solid and smoother show to the stage, with Suzan Holder's version of Aladin directed by Dan McGarry.

Opening proceedings is a beautifully welcoming performance from Amber King as Sheherazade, our narrator for the day, with her chorus, she sets the scene and returns throughout the show, offering songs and story updates. It's a delightfully perfect performance, one of many in this show. Not least, with the excellent casting of Aladdin, Samantha Turner, the perfect physical appearance for the role, principally perfect in fact! And also of the cast, one of the strongest singing voices in a show filled with a wide-ranging mix of tunes. It has to be said, that if there is a weak point of this show, it's in the singing standards, which vary quite a bit. However, these are at the end of the day actors, not singers, so, those that do have that extra bow just have the advantage to exploit for the future. 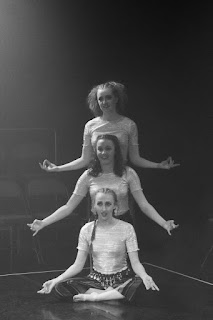 One extra bow shown by a few of the cast was with the innovative depiction of the Genie, three-headed and played by Beth Hâf Jones, Abi Cameron and Hannah Bacon. Close-fitting, overlapping dialogue and dual dialogue made this a neat little interpretation and some great skill from the performers. This coupled with some brilliant acrobatics, made it all a brilliant twist of the familiar character. Kieran James gave a fine stab at the perhaps ultimate challenging role of panto, the Dame, here in the guise of Widow Twankey. He was at his best with his hilarious switches back to butch gravely voiced Dame.

A particularly strong part of this show also was in its neat double acts. The brilliant weaselly performance from Daniel Hubery as Sultan and his Sultana played with a charm, but with inkles of quite an acting depth underneath, by Katie Glenn, they were both superb. As were Tyler Reece as Guard 1 and Louise Akroyd as, you've guessed it, Guard 2, who equally worked brilliantly together, with Reece particularly good, which I am still willing to say, despite him picking on me at his first appearance. I also liked PC Kung Fu and Officer Tai Chi played by D'angelo Mitchell and Mia Leonie respectively, Leonie coping admirably well with the awful prospect of slow delivery in lines, with a joke that just about didn't outstay its welcome! 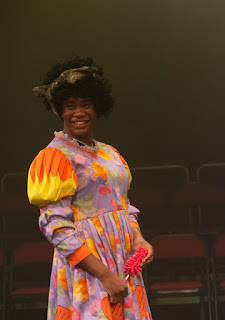 Perhaps the star of the show though, and I think with the excellently intrigued pupils from Castle Academy as well, was Nafetalai Tuifua as Wishee Washee. A full-on performance, fully getting what needed to be done in the panto environment. Dealing with any comments thrown at him with fast thinking skill, he sure knew how to work his audience. A definite panto star of the future I suspect!

Dan McGarry's direction used the space brilliantly with the challenge of entertaining all four sides of audiences at once with the arena setup. It was all a fluid success of a show where, unlike last year, all the actors, got it, and as a result had a captivated audience of children and some adults, due to the pub being shut (an in-joke). 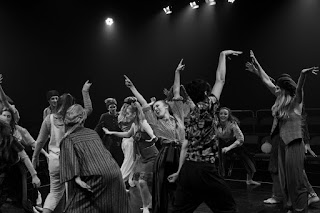