Review of Titanic The Musical at Royal & Derngate (Derngate), Northampton 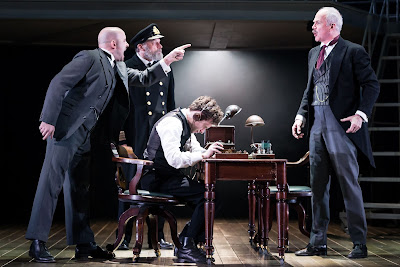 As the onslaught of jukebox musicals continues to hold sway on the theatre world, it always nice and bold to run with a musical now with brand new music, and to add to this, a musical based around the death of over 1500 people seems like utter madness. However, Maury Yeston (music and lyrics) and Peter Stone's (book) Titanic the Musical has proven any doubters wrong with a vastly successful run in London in 2016, following its initial launch in 1997 on Broadway (it pre-dates that famous movie by a few months), and now the musical is on a UK national tour.

If you don't know the story of the Titanic, your education has failed you, however, it's safe to say that this doesn't end very well, and becomes one of the worst disasters in modern history. Stone creates from this disaster an often curiously entertaining piece, full of characters that are all interesting enough, but never so to overwhelm one another, as this is very much an ensemble piece. The only way you would ever choose to single out individual characters is through their relevance to the ship. Hence, you remember Philip Rham as the distinguished Captain Edward Smith, Simon Green as owner J. Bruce Ismay and Greg Castiglioni as designer Thomas Andrews the most. However, unlike them as passengers on the ship, all characters in Stone's book are given the same class in the performance.

Performances are all superb across the deck, however, a few standouts, Castiglioni is immensely strong as Andrews, drifting from the soft pieces early on, to bold and superbly strong sung pieces later on. Green is solid, but slightly cartoonish, in the depiction of owner Ismay, and while there is a superb song titled The Blame delivered by designer, captain and owner, which attempts to spread said blame, it's clear that we are led towards Ismay as the main culprit.

Oliver Marshall is simply brilliant as radioman Harold Bride, sporting a quite stunning singing voice in his numbers, particularly so in The Foundering. Every scene that Dudley Rogers and Judith Street perform in as Isidor and Ida Straus is filled with a wonderful love, and their work creates some of the greatest emotion from the whole show. Finally, Niall Sheehy gives a rugged and earthy performance as Frederick Barrett, depicting the heartthrob role in the show, performing all his songs with a captivating and soulful way. Barrett's Song is also really particularly well staged and performed. 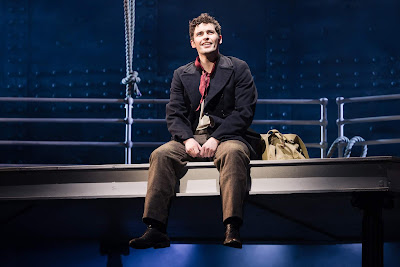 The music numbers are bold and often operatic in style, What A Remarkable Age This Is is very much in a Gilbert & Sullivan style, while a sprightly dance routine (but not the period?) spruces up the lively number Doing The Latest Rag. It's particularly fascinating how Yeston makes the rather mundane really highly entertaining. So the boarding of the passengers is brought to wonderful life by the comical description of the 1st Class Passengers arrival by Claire Machin as Alice Beane, there is so much life given to a song about the preparation of the dining table, and finally a truly gorgeous song of love made from the simplicity of sending a message, and performed amazingly well by Marshall and Sheehy. It all keeps the slightly too long first half moving along with enough energy.

Technically it wasn't perfect, there were a few missed light cues, including an extremely awkward delayed one at the dinner table. Worst of all though, from my centre section aisle seat, the stage left drapes were poorly positioned, so I spent the evening being distracted by movement, including the stage management going about their business, although it was slightly amusing at one point to see them do a little dance. This definitely needs fixing though, as I certainly wasn't in the worst position for this to visible. 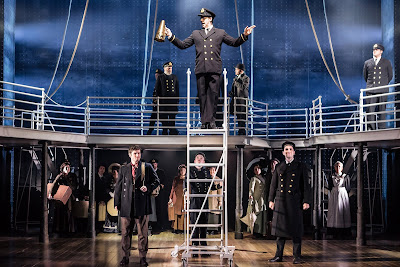 The set though from David Woodhead (who also doubles up on the splendid costume design) is solid and bold, providing the strong steel backdrop, and an overworked pair of stairs. It's true that is doesn't do a great deal for a while, but its turn comes in style finally as the superb Castiglioni performs Mr Andrew's Vision and it throws it's neat trick into the mix. Direction from Thom Southerland is delightful, using superb use of the theatre aisles, particularly through the opening boarding piece, where we as the audience feel very much onboard the ship.

Titanic the Musical is perhaps much better than you might expect of a show based around this event, although it definitely isn't sure how to conclude itself, deciding in a perhaps poignant memorium section, and a curious reprise of the Godspeed Titanic song which ends up making it feel a tad rushed at the end. The sinking of the ship is handled as best I suppose it can be on stage, but you feel like something else should happen in this respect.

However, at the end of the day, this show is about the people, of whom we get to know a lot of during this show, it is filled with some genuinely good songs, which, for once after you see the show, I definitely suggest you seek out the soundtrack. This is definitely one that gains much from a second listen. A very strong and solid production.


A quality musical which is destined not to sink without trace.
⭐⭐⭐⭐