Review of The Crucible by University of Northampton BA Actors at Jacksons Lane Theatre, Highgate, London 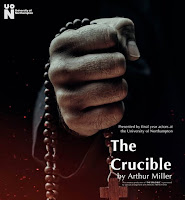 There is no denying that Arthur Miller's The Crucible is a classic and well-regarded play and that in the hands of the always brilliant University of Northampton BA Actors, it should have been a thrill of innovation and epic theatre. So, why, when there was so much talent, did it become just an uninspired, by the numbers production?

I had only seen the play, formed around the 1690s Salem Witch Trials, once before in a vibrant school production that, while clearly long and drawn out (it's a heck of a long play in this, it's pure form), always remained entertaining, especially being performed by that young and enthusiastic cast. Here in this version directed by Nadia Papachronopoulou, it should have been so, so good, with the actor's talent, the potential for a dramatic stage version crackling with inspired moments was so overwhelming. 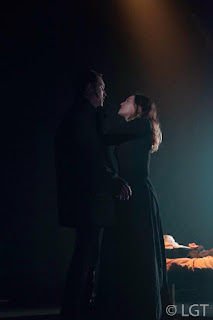 So why did with end up with just a static, curiously soulless affair? In principle it does nothing wrong, performances are strong, with a confident one again from Alexander Forrester-Coles as John Proctor, the way he depicted the characters weaknesses especially comes across tremendously well. Elsewhere, Farrah Dark was a revelation as the bolshy and forthright Abigail Williams, a character having to act in a way far beyond her years. 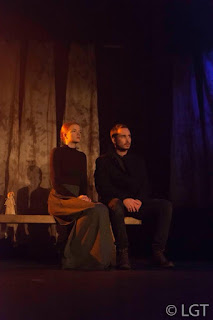 D. B. Gallager was a truly scary Judge Danforth, causing a lot of uncomfortable moments as he proceeded over the affairs. In the complete opposite was the kindly, and sweet-natured Elizabeth Proctor, played with such a gentle touch that perhaps only Ceara Coveney could, in this year group of actors. Finally, I enjoyed Anya Gallagher's Mary Warren, a confused state of a character, wanting to be part of the gang, then not wanting to be, and switching back again in an attempt to recover the situation, only to make it worse. Warren is a great side character in the play, and I really enjoyed Gallagher's portrayal of her. 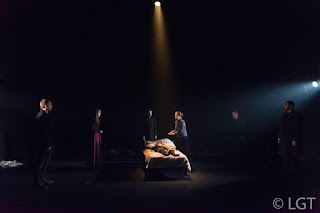 So, what was wrong with The Crucible then? Well, for me, it just lacked ambition, scenes are motionless, the way the witches are handled uninspired, and just so lacking in creative aspects, less so than the school production I saw even. In a group where we have had a female Richard II, the strongest Flash Festival of my five years, some innovative Christmas shows allowing the actors to develop more in different areas, and Accused, one of the best-devised shows I have seen, The Crucible in this form, gives them nothing to get their teeth into. They often felt unsure as well, with the most slips of dialogue that I have ever seen from a University show, and a few that I know to be excellent actors, giving poor performances.

There is no other way of putting it, other than I was really disappointed with The Crucible, and it's a tremendous shame that this was one part of the work of these actors on display in London, they are all much better than this show allowed them to be. Far too safe, and safe isn't something the University of Northampton BA Actors have ever done before in my experience.

The Crucible was one of three shows performed at Jacksons Lane Theatre by the University Of Northampton BA (Hons) Actors from Thursday 7th to Saturday 9th June 2018.