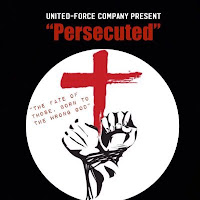 It's perhaps a shame that the major talking point after United-Force Theatre Company's production of Persecuted is its final scene, and more so over the sheer realism of it, rather than anything directly related to the acting and writing of it. The shame is that it overshadows what is quite a brilliant piece of theatre in its own right, well constructed and superbly acted by the trio in the group, Alexander Forrester-Coles, Chris Tyler and Radostin Radev.

The date is 11th May 2005 and the Iraq War is no longer having the initial success that it had after destroying Sadam Hussain's regime. In a camp in Basra, Mohammed bin Osama bin Laden (Radostin Radev) is captured and under interrogation by commander James Farrell (Alexander Forrester-Coles), the good cop of the story, and Dan (Chris Tyler),  a Lieutenant, very much of the bad cop variety.

It's an ugly, but also a very vivid tale, claustrophobic and always intimidating. When the actors are not churning through the intimidation and attempt to break both Bin Laden, and us the audience, a cleverly constructed collection of video spreads further pain upon the audience. It's all very uncomfortable but brilliant as a result. 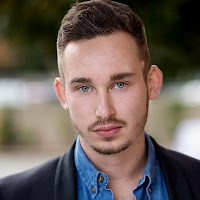 Then we reach the final sequence where, if the audience isn't already broken, we have one of the most challenging sequences of physical violence that I have seen on stage. This is full intensity, full contact, "stage combat", it is at times very challenging to watch, not because of what is happening story-wise, but the uncomfortableness of whether the performers are actually safe. I wouldn't had wanted to be involved in the health and safety and disclaimers on this one. 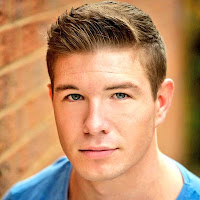 Even now, some considerable time after seeing the show, I don't feel comfortable remembering this sequence, and while, I am sure all great care was taken to stage it, and that is was safely achieved, you also have to consider the reaction to such things from an audience. It's fine to make an audience uncomfortable from a story, or sequences in a play, but not to leave them uncomfortable with potential injury from actual violence. Tyler might be a fighter in his other world, but the audience was not present to watch a real punchup on this occasion, and as I result, I concede myself, it made me very uncomfortable.

Persecuted though was still an excellent piece of theatre, the cast sublime with the ever-reliable Forrester-Coles once again assured, and brilliantly controlled as his character required. Tyler not only 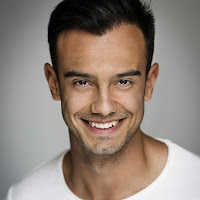 looked the part of the fiery character, bent on revenge for his loss, but genuinely a very frightening performance. Radev meanwhile was a quietly calculating Bin Laden, feeling extremely confident despite his position, cold and oh so far from his recent performance as a bizarre elf. A classy turn of acting from all.

I admired Persecuted for its performances, and would never be disappointed for having seen it, however, that final scene will remain in my mind as a step too far. It was a poignant reminder also of a time period for the country as well, which set the scene for many problems to come.