Flash Festival 2018: An Error In The Melody by Carousel Theatre Company at Hazelrigg House, Northampton 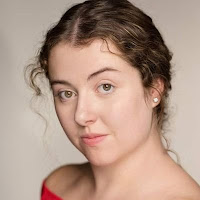 At the centre of Carousel Theatre's An Error in the Melody is an intriguing character, performed by the groups solo performer, Amelia Renard. She plays, with some skill, Leonie Owens, a composer of immense skill herself, well, in her head in any case.

With shades of Glorious! The true story of Florence Foster Jenkins, which I have also seen this year, Owens just wants to perform and absorb the love of an audience, despite the fact that her skills mostly just lie within her head. Owens perhaps isn't anywhere near as nice a character as Foster Jenkins though, and when the tide turns against her, she really is quite nasty, and definitely very cold.

The dislike of the character though isn't the biggest problem with An Error in the Melody, it's more that it is a very insubstantial piece. Two very long scenes in this play are just so lightweight, the opening where she tidies her shelves, mostly with her back to the audience, and then later another scene similar in style. It all, unfortunately, stalls the piece, and perhaps if the rest was solid and more importantly longer, these wouldn't have felt so bad, but this is also a very short performance, barely twenty minutes.

It's such a shame that you can't help but leave disappointed after Error in the Melody, it all stems from frustration really in its brevity, what happens beyond those two scenes is great, however, as it stands, it simply wasn't enough of a play. Development further would help this, as the character is strong, she just isn't given enough to do, so the show sadly feels half ready as a result.