Review of Funny Faces at The Playhouse Theatre, Northampton

Funny Faces written by Steve Dimmer and presented by Next Page Productions bring to life an hour in the life of two British comedy icons of yesteryear. We are in a props room and then a dressing room where Joan Sims and Sid James respectively chat with us like we are occupying one dusty, cobwebbed corner of the room. 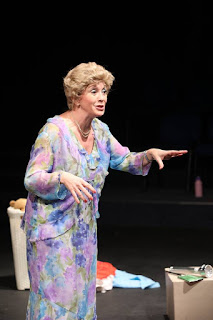 The first of the evenings solo shows is titled SIMply Joan and stars Caroline Nash. For those of a certain age, Joan Sims is and always will be the Carry On star, and while my memory of these films is fairly prominent in my mind as well, despite the series finished by the time I was around, my biggest memory of Sims comes more curiously from a role in a BBC sitcom starring Dennis Waterman titled On The Up. In this, Sims played the rather posh Mrs Wembley, who was rather fond of a tipple or two, with her show catchphrase of "Just one more" a regular feature.

It is apt that I recall my own memory of Sims here, as the shadow of drink hangs over the life of her in real life and SIMply Joan, while offering lovely memories of her life, also has much sadness permeating through it. It seems to be a fact that the very best of entertainers are often also the saddest in real life, and the history relayed through this piece suggest that her co-stars in the Carry On world were some of the most troubled. 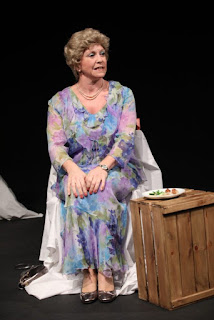 It's not a totally sad piece though, in fact, the humour holds strong for much of the play. There are some tremendous moments of comedy here in fact, and some brilliant one-liners, all delivered with relish by Nash. The nature of the  Sims and Kenneth Williams conversation recalled here is extremely sad, and it is such a shame that two people who brought so much entertainment to the world were never able to find their own personal love to their worlds.

In amongst the laughter and sadness, we are also treated to the rather scary, as Sims recalls a moment from her role as child killer Amelia Dyer in a 1980 episode of Lady Killers. It is a scene at odds with the rest of the play, and indeed was at odds with the career of Sims herself, so, it manages quite a moment of impact.

Throughout the piece Nash is a confident performer, portraying a number of characters as she recalls her memories and moments of life. The show itself is perhaps a little overlong and would have benefitted from a trim in places, however, having said that, it never bores and attention remains solid throughout. For me, the cabbie creates the most poignant moment in the play with the line to Sims of "pity you are all dead". This is Sims true sadness perhaps, that all her friends, and very special friends at that, died before her. However, like Sims in this play, we have the memories they left behind, and perhaps as a result of SIMply Joan, many of us will revisit them. 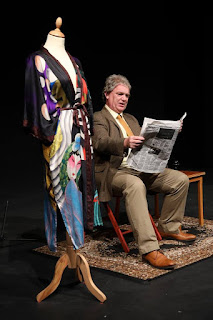 The second play, Wot Sid Did features "cockney" performer of Mr Sidney James (we learn that in the play that he is far from a cockney, born in South Africa). James for those of that certain age is perhaps more famous for his work with Tony Hancock, but he remains probably better known now for his work on the Carry On films, as they remain much more prominent.

Playing James here is writer Steve Dimmer, and while he may not quite look like the star, he creates the gruffness of him, as well as the trademark dirty laugh. We meet Sid in his dressing room on a, spoiler permitting, fateful day in his life.

It has to be said that James in his personal life depicted here was not a very nice guy, he has his addictions, smoking and drinking, but these are happily excused, and his own problem. However, the womanising, and in fact creepiness to the female sex, is really rather uncomfortable. 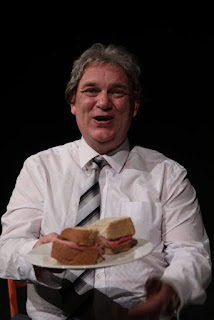 Therefore unlike Sims, he is a difficult person to like, and for that reason, Wot Sid Did also is occasionally difficult to like as a play. However, it is though expertly created, and it tries hard to get its audience onside. The play makes much of his love for Barbara Windsor, and while it tries to portray this as true love, for the audience for this play, and perhaps with James himself in true life, it's too little too late. He is a victim of the person he has been before and doesn't probably deserve her love, if indeed he had survived it, should the other prominent man in Windsor's life have come knocking.

Both plays have been very nicely directed by Rosemary Hill, never forcing the need to move this play around the stage too much, as can occur with solo performers, rather it just gently keeps the show flowing. The sets for the two plays are simple also, but very effective, with some very occasional, but brilliant use of the spotlights from the technical side.

Despite my feeling that SIMply Joan was just a little too long, it was for me the best of the two, despite it featuring the least known of the two performers. It had the greater detail and interest within, and the much more sympathetic person. However, both were excellently performed by Nash and Dimmer and provided at an extremely fulfilling evening of entertainment, which audiences both familiar and unfamiliar with the performers are likely to gain good entertainment from.

Funny Faces runs until Saturday 28th April 2018 at the Playhouse Theatre, Northampton, before continuing its tour. Details at nextpageproductions.co.uk