Review of The Flying Lovers Of Vitebsk at Royal & Derngate (Royal), Northampton 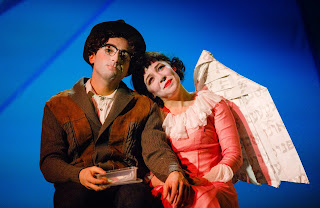 Kneehigh, the Cornwall based theatre company, has created an immense recognition over the 30 years or so they have been formed, and Emma Rice, who directs here, has come out as one of the more recognisable people from the group. Here, with The Flying Lovers of Vitebsk, they, and Rice are in incredible form.

Writer Daniel Jamieson tells us the tale of artist Marc Chagall and his wife Bella as their love blossoms during some of the most turbulent times in history.

This tale, by Jamieson, first saw a life on stage over 25 years ago, back then titled Birthday (the name of a painting by Chagall, which depicts he and his wife doing their "flying"). In the original production, Jamieson played Marc, and Rice played Bella. Now many years later, Rice has taken the original and created a brand new vivid version.

It's easy to fall in love with The Flying Lovers of Vitebsk very early on, as two things occur. The first is as you are seated in the theatre, you become captivated by the intricacies and the bizarre nature of the set by Sophia Clist. Wooden posts contort at odd angles, a square staging area dramatically angles towards the audience, a chair impossibly stays upon it. This set strewn with many items inkling of things to come is just beautiful in itself. 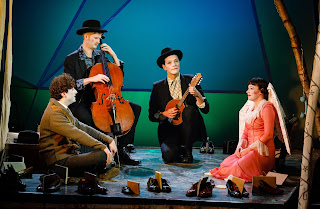 Then the opening moment where we are presented with the first song of the evening, another thing of beauty. The music selection in this production is stunning, much created by Ian Ross, and performed live onstage by he and James Gow, is simply amazing. This coupled with the singing abilities of cast members Marc Antolin and Daisy Maywood leaves a shiver down the spine, most particularly the richness, and haunting nature of Antolin's voice.

So, if nothing else was to happen, I would probably be happy with the set and music alone, however, what follows is 90 minutes of the most touching, funny and clever theatre you might wish to imagine. It is, by its theme, a surreal world, a theatre play falling, as it were, from the works of Chagall himself. Full of bizarreness and colours infinite, the lighting on this show from Malcolm Rippeth is immense in itself. This play is a three-dimensional play cascading from Chagall's canvas. 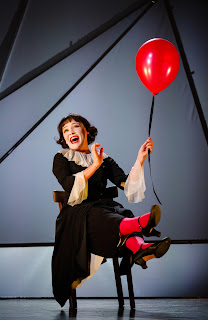 So much said before even getting to the two performers tells much of the detail in this show, however, Marc Antolin as Marc Chagall and Daisy Maywood as Bella are also simply incredible. This show requires perhaps everything of a performer: acting, singing, physical ability of an exceptional level, even clowning. It also though requires a lightness of touch to make them all work together, as we switch from one ridiculously frantic scene of strange objects strapped to their heads and to a quiet gentle moment of reflection at the traumas going on. Antolin and Maywood are clearly amazing performers and have all the required skills to make this piece work so well, in other hands, some of the situations could easily just not work.

The Flying Lovers of Vitebsk is the final work for Kneehigh from Emma Rice, and to say she leaves on a high would be an understatement. It is a love letter of a play to both the company, it's audience, and to the poignant history of the Chagall's. It looks and sounds gorgeous in so many ways, and leaves a wave of emotion through its audience.


A masterpiece of a theatre production.
⭐⭐⭐⭐⭐

The Flying Lovers Of Vitebsk runs at the Royal & Derngate until Saturday 28th April 2018 before continuing its tour. Details at kneehigh.co.uk