Review of A Bunch Of Amateurs at Stantonbury Theatre, Milton Keynes 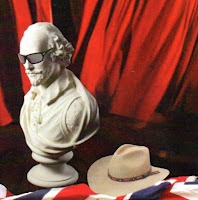 I first saw the film of A Bunch of Amateurs a couple of years ago back when I was purely a watcher of amateurs productions, rather than my now, slightly more involved persona. Therefore watching this production by Etc Theatre of this curious tale of country folk, adapted for the stage by two of the original writers Ian Hislop and Nick Newman, and their amateur dramatics world, offers a little more intrigue than that film first did. It also helped that I was seated with a bevy of knowing amateur dramatics folks as well.

Stratford Players are in trouble, their venue is under threat from developers, so, in a last-ditch attempt to save their group, they send appeals out to the big names of the acting world to help generate lifesaving interest. Answering their appeal is the also in trouble, Hollywood actor Jefferson Steel (Bart Gamber). His flagging career sees him accept the opportunity to perform King Lear, in the home of the Bard itself, Stratford. Sadly it turns out to be a barn theatre in Stony Stratford.

A Bunch of Amateurs is a painfully British comedy (in a good way), often genuinely funny, and rarely do you end up less than a little entertained. The original film had some big names in it, so filling the likes of Burt Reynolds shoes as Jefferson Steel is Bart Gamber, and Sir Derek Jacobi as Nigel Dewbury is Victor Guse.

Gamber is excellent as the occasionally sweary and obnoxious American, sporting an unsurprisingly strong accent (he is from America after all), he delivers Steel with the right balance of hate and gradual progression of softening to the character. He deals also with some surprisingly physical moments as well with skill, managing, just, to not to bring the set down with him at times. It's a really strong performance.

Susan Lee Burton gives us a very likeable character as director (and fool) Dorothy Nettle, it is lowkey at times, and that here works really well. She is the perfect antidote and calming influence on all the other bold, and often ridiculous characters, and Lee Burton gives Dorothy a good measured performance.

In one of the ridiculous, over the top performances is Victor Guse as the pompous, up himself, lawyer Nigel Dewbury. This character doesn't need underplaying, and there definitely isn't any of that going on in Guse's performance here. Scenery chewing in the extreme, and all the better for it.

The complete opposite is a lovely sweet performance from Leah Gaskell (the programme states, this is her "first proper play") as Steel's daughter Jessica. It's a confident first role, and her character's obvious love/hate of her father is nicely judged by Gaskell.

The trio of John Drinkwater, Paul Wheeler and Sandy Reid-Miller have worked wonders on the set, creating three distinct areas, including the brilliant centrepiece of the theatre/barn itself. It is a visual delight and works really well.

It's got to be said though that at times there is a particular lack of pace to the performance, and indeed script itself, most especially in the second act, when many of the characters foibles have slightly become a bind, and the relatively lightweight story at this point cannot always drive it on.

However Etcetera Theatre and director Steve Brigden have still done a fine job, incorporating some fun performances, and at times the really clever use of technology for video and sound effects helps keep the interest of the audience. It all results in a surprisingly quality show.