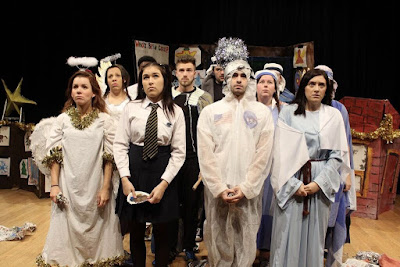 The Flint Street Nativity was presented by the BA Actors as part of a double bill with The Night Before Christmas, and you could hardly imagine such a difference in style. Tim Firth's genuinely, quite endearing play was quite the opposite to the rough and vicious Christmas spirit of the previous show.

Flint Street offers the intriguing situation of adult performers acting as children as they present to their audience (and always watched by the unseen, but a creepy red lighted teacher, Mrs Horrocks), their production of the nativity. It forms quite a delight of totally recognisable characters from your school days if you are able to remember that far back. 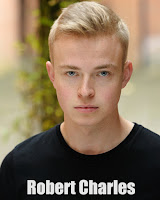 Among my favourite performances from this are Gemma Fensham as the total brat Gabriel, never seeming to have an expression other than sucking a lemon, as she breezily switches her best friend back and forth with abandon. She rather stylishly perfected the sulking strutting off routine as well, fabulous! Playing up to his size with menace (but high humour mostly), Jake Wyatt brought a style to his sudden appearances as the Innkeeper, which were all perfectly timed.

There was a delightful performance from Robert Charles as the sweet-natured, but unfriended Wise Frankincense, who garnered much of the audience sympathies, along with an equally understated performance from Terell Oswald as Ass. Robert Barnes created some brilliant humour as Herod/Joseph, in a character that reminded me much of Max in The Play That Goes Wrong, who himself is still a child at heart. Barnes' timing, and audience reactive ease, clearly made clear that there is quite a performer there. 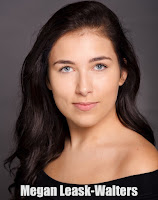 I found Farrah Dark quite delightful and suitably innocent as Mary, despite the constant threat of role usurpation from the plotting Gabriel. She also achieved quite an impressive puke, if that can be listed as a suitable acting achievement for the CV? Finally, my favourite performance came from Megan Leask-Walters as the Narrator, not necessarily a showy role, but one that with great effort, can be made one. For me, Leask-Walters did this rather brilliantly, who of all the cast, nailed down the youthful nature of the role the best. Trying desperately as she might to keep the show moving along as the chaos surmounted around her. Really delightful.

The play itself is great fun and makes a sensible one act option despite the fact that it is populated with a large number of characters. They all get fully realised by both writer and performers within this fifty minute or so play, and while they might even during that short time become over-familiar, it remains an entertaining piece of theatre throughout. A nice friendly and really quite sweet play, nicely performed.