Review of Dracula (or A Pain in the Neck) at The Playhouse Theatre, Northampton 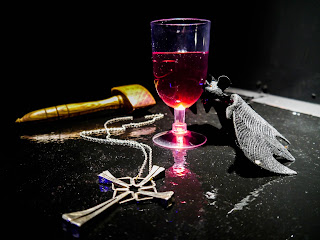 Regular readers of this fair blog will be aware that I am not overly keen on pantomimes, although I always at this time of year end up inexplicably in the vicinity of more than one (and this year I am destined for six I believe!). So, despite Dracula (or A Pain in the Neck), not officially being billed as a panto, that is very much the vibe of this Playhouse Theatre adaptation of the Bram Stoker classic.

A company of actors (well, aristocrats) in the 1920s have assembled to put on a little show, their own version of Dracula (or something like Harker of Whitby meets the Count) for us, the "willing" audience. Our host is Sir Simon Smee (Simon Rye) who will play Jonathan Harker during this little performance.

What follows is for the best part a slightly loose version of the Stoker classic, which does definitely at times get a little complicated in the way it tells the story, not made easier by the playing of characters playing characters explanation. However, this is, beyond its complicated moments a very funny script, which I think doesn't always get the reaction it deserves and with a bigger, better audience would flow so much the better.

The cast all give spirited performances, even if some of the playing doesn't always feel in keeping with the style. Simon Rye as Sir Smee/Jonathan Harker handles the largest role impressively, capturing the upper-class antics nicely. He is also part of one of the funniest sequences that featuring the tent (also including Diane Wyman as Lady Kenyon/Lucy), which is packed deliciously with the many worlds of innuendo. Shallow definitely, funny, most certainly.

The Count himself is played with a brilliantly physical style by Addar Siedlecki, in a role deliberately not played for laughs against all the antics of the rest of the cast (in keeping with part of the idea of the play). You certainly couldn't ask an actor to throw himself into a role more than Siedlecki does here, contorting and crashing about the stage at times, willing to put on a show and risk a little injury at times. Overal a brilliant effort.

Diane Wyman and Jerry Delaney are good value in their prim and proper roles of Lucy and Mina, destined for "character development" down the line, without giving too much away. Kevin Pinks adds to his exceptionally successful turn in Journey's End, with with a laughter gathering pure Yorkshire dialect role. Corinna Leeder makes for an excellent Van Helsing and makes this one of the best roles that I have to date seen her in, definitely managing to capture the style that this little show should really be played in.

However, the star of the show was without doubt Adrian Wyman as his lunatic creation of Renfield (and add-on newsboy), mining every ounce of comedy out of the material and showing generally how funny it is at times. Even making the capturing of a fly, one of those brilliant comedy moments. Quite a special performance and was clearly the audience's favourite.

My own least favourite part of theatre though has a habit of rearing its head a little during Dracula, and that is scene changes. I felt that a few during the show were not only handled a little slowly, but some changes were a little pernickety and unwanted at times. There were certainly a few that would have been better handled by the cast as they came on or left each scene. Also, other things I tend to dislike which makes the situation worse and did here, are the cast and stage manager getting in one anothers way during a change, or horror of all, cast already on stage and standing watching the change going on.

Beyond this, technically challenging as this show is, it generally went pretty well, although there were a few obvious lighting moments slightly wrongly timed, but considering the number involved, pretty good. Set-wise, it was purely functional, if a little plain as mostly a black box. There were some nice touches, I did love the staging of the car sequence and there was a good use of the theatre space beyond the stage as well, including the "this is definitely not the same way" moment in the first half.

I genuinely wasn't sure that I was going to enjoy, an almost pantomime version of Dracula, and while it's terribly clunky at times, and definitely needed that little more time in rehearsals, it did come as quite a surprise how entertaining it managed to be. I expected little if I am honest, and in the end got a pleasant surprise of a show, which is definitely in need of a bigger audience to bring it fully to life.


Dracula (or A Pain in the Neck) runs at the Playhouse Theatre, Northampton until Saturday 9th December 2017. 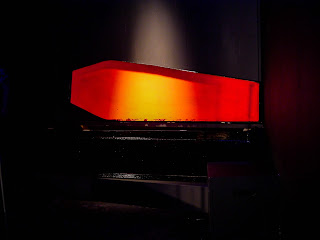